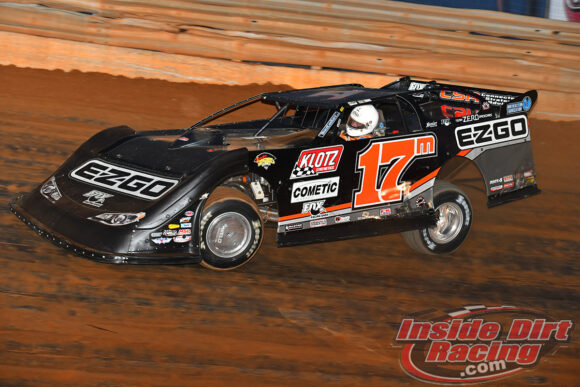 Dale McDowell did not start Thursday night’s Castrol FloRacing Night in America feature from an optimal spot but he certainly finished where he hoped to. The veteran driver charged from 10th on the starting grid to the lead with less than 10 laps remaining then drove on to score the win at the Tri-County Race Track.

The Team Zero Race Cars driver from Chickamauga, Georgia earned $22,022 for his efforts on the quarter-mile track located in Brasstown, NC.

A total of 35 cars were signed in for competition

Feature Re-cap: At the start of the 53-lap feature outside front row starter Ferguson went to the front of the field with Alberson, Smith, Sheppard and Madden trailing. Alberson moved in to issue a challenge for the race lead on lap 3, while at the same time, Sheppard took third away from Smith.

By the fifth circuit, the top-3 cars of Ferguson, Alberson and Sheppard were racing in close quarters with one another using all lanes of the high-banked track. Eventually, however, Ferguson would begin to pull away from his closest pursuers until a lap 17 caution for a spin by Tyler Erb slowed the pace and bunched the field.

On the lap 17 restart, Sheppard jumped into second and immediately began working on Ferguson in an attempt to grab the race lead. Those two drivers continued their fight among slower traffic with Madden and fast rising McDowell moving in on the lead duo.

Second running Sheppard would experience trouble on lap 39 when he slowed with a flat tire. Ferguson continued to show the way when green flag action resumed with Madden now second just ahead of Alberson and McDowell.

McDowell got by Alberson to take third on lap 41 then engaged in a fierce three-way fight with Ferguson and Madden for the lead. By lap 43, the No. 17m car had taken third and moved inside of Ferguson in hopes to wresting the lead away. Those efforts paid of two laps later when McDowell moved around Ferguson to take the point.

Ferguson quickly attempted to dive back under McDowell but lost grip and spun to bring out another yellow flag on lap 45. On the ensuing restart, Overton grabbed second with Madden now third but it would McDowell who would drive on to the checkered flag to score the win.