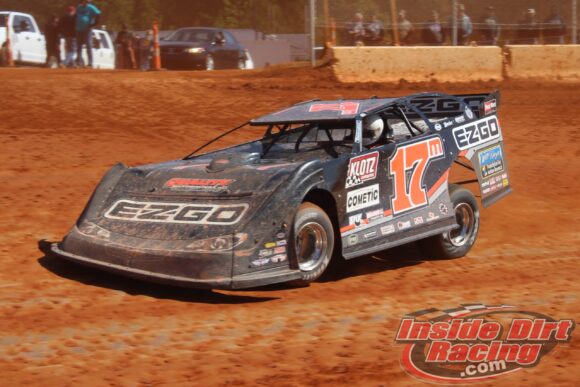 The historic Southern All Star Dirt Racing Series rolled into the Cherokee Speedway to kick off its 37th season. Dale McDowell left out of Gaffney, SC at the end of the day with a winner’s check worth $12,000 as the Ginger Owens Memorial March Madness champion.

Michael Brown outperformed the competition in Group A time-trials by posting a lap of 15.947 seconds around the 4/10 mile clay oval to beat out Casey Roberts, Kyle Hardy, Trent Ivey, and Kyle Strickler.

Dale McDowell was quickest in Group B qualifying and overall with a lap of 15.717 seconds to better the efforts of Jonathan Davenport, Chris Madden, Zack Mitchell, and Chris Ferguson.

Michael Brown won the first heat race of the afternoon by beating out Brandon Overton, Kyle Hardy and Ross Bailes while Dale McDowell won the second preliminary ahead of Chris Madden, Adam Yarbrough and Chris Ferguson.

Benji Hicks and Sam Seawright won the two B-main races used to set the remainder of the starting lineup for the main event.

On the initial attempt to start the 60-lap feature a multi-car incident eliminated one early favorite and damaged others. Trent Ivey suffered enough damage that his car had to be taken to the pit area and withdrawn from the race while Chris Ferguson suffered a flat tire and had to restart at the rear due to his trip to the hot pit. Ferguson would soon pull off the track and end his night prematurely.

When the race finally got underway McDowell used his outside front row starting position to his advantage and took the early lead going into turn one. Brown, Davenport, Roberts and Madden followed the early race leader.

McDowell immediately began to pull away as the field ran in single-file formation around the bottom of the track. However, the No. 17m car began to encounter slower traffic by lap 10 which allowed Brown, Davenport, Roberts, Madden and Overton to close in and work for an opportunity to challenge.

The veteran driver was careful not to give up the bottom groove as he patiently worked his way by the slower cars one by one. Further behind, contact between Roberts and a lapped car set off a chain reaction that ultimately forced Madden off of the bottom groove and allowed Overton to grab the fifth position.

On lap 24 Brown was briefly able to root his way under McDowell and pull side-by-side with the front runner. However, the ‘Mac Daddy’ was able to fight off the challenge and maintain the race lead.

On lap 31, Lanigan passed by Madden to climb to the sixth spot. But the ‘Bluegrass Bandit’ would not stay in that spot for long as he pulled off the track with mechanical issues on lap 43.

McDowell encountered slower traffic once more with just four laps remaining but no challenge for the top spot would be forthcoming. Ultimately the Shane McDowell Racing Sweet-Bloomquist Race Car would sail under the checkered flag for the victory.

The win came just days after the death of McDowell’s step-father who had aided the driver during the early years of his career.