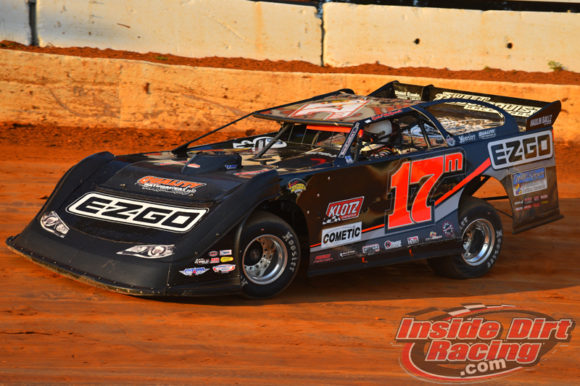 Dale McDowell led all the way in the feature

The Schaeffer’s Oil Southern Nationals ventured to 411 Motor Speedway on Friday night to contest its next-to-last race. Dale McDowell held off a determined Brandon Overton to score the win and collect $10,000 for his efforts. The feature made history by becoming the first 53-lap main event on the Southern Nationals tour to run caution free.

McDowell led the way in Group A qualifying with a lap of 13.780 seconds around the 3/8 mile clay oval. Michael Chilton, Jason Jameson and Donald McIntosh were just off the pace set by the ‘Mac Daddy’.

Overton was fastest among those who qualified in Group B and overall as he toured the Seymour, TN track in 13.762 seconds to beat out Ross Bailes, Dakotah Knuckles and Ryan King.

McDowell earned the pole for the feature by winning the first heat ahead of Jason Jameson, Cla Knight and Jake Knowles while McIntosh took the second preliminary over Michael Chilton, Tanner English and Aaron Ridley.

Overton would start from the outside of the front row in the main event by virtue of his win in the third heat ahead of Dakotah Knuckles, Cory Hedgecock and Vic Hill. Ryan King won the fourth and final heat by beating out Kyle Strickler, Ross Bailes and Tyler Clem.

John Ownbey won the lone B-main used to set the remainder of the starting lineup for the main event.

At the start of the 53-lap feature McDowell bolted the lead with Overton, McIntosh, King and Knuckles trailing. The race leader quickly opened up a gap of ten car lengths over his pursuers as the top-10 runners fell into a single-file line.

By lap 8 McDowell found himself fighting lapped traffic which gave Overton the rest of the pack an opportunity to close the distance that had lost early on.

By lap 15 the cars of King, Knuckles, Strickler and Hedgecock were embroiled in a tight battle for positions 4-7. Two laps later Hedgecock moved around Strickler to take sixth and then by Knuckles on the following circuit to move into the top-5. 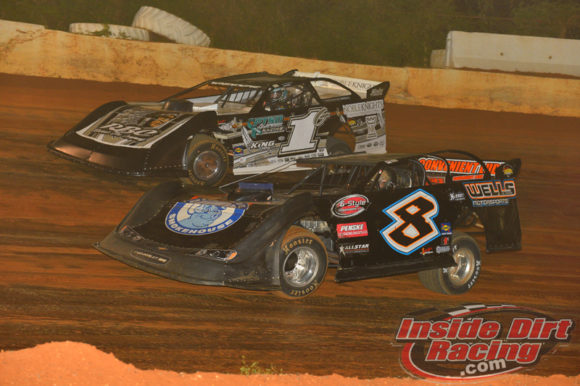 Both Hedgecock and Strickler moved up even further when both went around King to grab fourth and fifth respectively.

By lap 27 Overton had moved right to the rear spoiler of McDowell as the lead duo continued to work in and around slower machines. Two laps later the No. 2 even drew alongside the No. 17m but McDowell was up to the challenge..

Further back, Strickler and Bailes were moving forward as that pair moved around Hedgecock to secure fourth and fifth. But back up front Overton began to employ a higher line around the track in hopes of moving by McDowell but was never able to get alongside again. 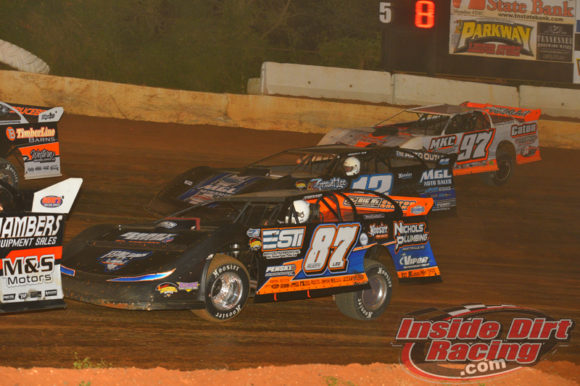 At the end of the night it was McDowell who cruised under the checkered flag to achieve victory.