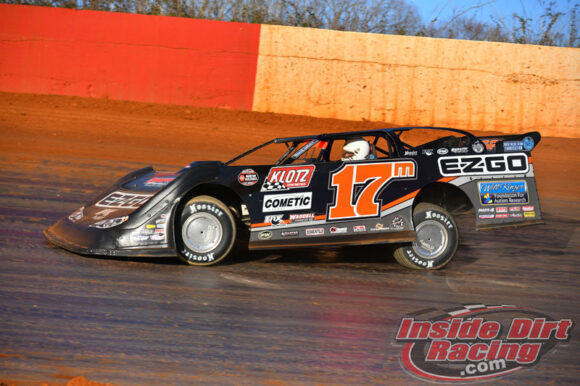 Dale McDowell led all 40 laps to claim the win

Although the points-paying portion of the Schaeffer’s Oil Southern Nationals ended on Saturday night at the Tazewell Speedway, the Ray Cook-promoted mini tour made its way to the Volunteer Speedway on Sunday evening to contest a makeup event from a rainout back on July 19th. At the end of a caution free night of racing, it was Dale McDowell who received the accolades for his victory at the Bulls Gap, Tennessee facility. The Chickamauga, Georgia driver earned $4,053 for his efforts.

Zack Mitchell topped the charts during Group A qualifying when he turned a lap in 13.384 seconds around the 4/10 mile clay oval to beat out Michael Chilton, Vic Hill, Donald McIntosh and Kaede Loudy.

Dale McDowell was quickest in Group B time-trials with a mark of 13.571 seconds to better Benjamin Cranford, Dakotah Knuckles, Jeff Neubert and Cody Overton.

The starting grid was set entirely from the results of qualifying.

When the 40-lap feature took the green flag McDowell used his outside front row starting position to his advantage and bolted to the early lead with Mitchell, Chilton, Cranford and Knuckles giving chase. The top-5 runners quickly fell into single-file formation as they turned high speed laps around the high-banked track.

By lap 5, the top-2 of McDowell and Mitchell separated themselves from the pack as they looked to settle the issue among themselves. Just 7 circuits into the feature, the leaders began to encounter slower traffic and would have to navigate through those cars for much of the remainder of the caution-free affair.

While McDowell and Mitchell ran in tight formation at the front, Cranford, Knuckles and McIntosh contested the remaining position within the top-5 as they also ran in close quarters.

As the laps clicked toward an ending, Mitchell closed in on the rear spoiler of McDowell and appeared poised to make a run for the race lead. However, the veteran driver was able to keep his rival at bay using slower cars to his advantage.

After the 40 laps were completed, it was McDowell who would sail under the checkered flag to earn his second Southern Nationals win of 2021.