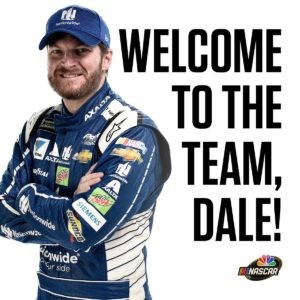 Dale Jr. has been a big part of NBC’s marketing campaign

This weekend will mark the first set of events of the 2018 NASCAR season to be covered by NBC and its family of networks as the Monster Energy NASCAR Cup Series headlines a three-race weekend at Chicagoland Speedway with its Overton’s 400 on Sunday. And with the change of the sport’s television coverage from the various Fox networks to NBC comes a somewhat unusual approach by the incoming network as the focus seems to be more on one of the announcers calling the action rather than on the action itself.

Dale Earnhardt, Jr. retired as a full-time racer at the end of the 2017 season and NBC quickly lured him into the role of broadcaster. The races at the 1.5-mile Chicago-area facility will be the first he has called in his new job and his employer is making every effort to take full advantage of his popularity with a big marketing campaign centered around the fact that he will be in the booth rather than on the track at 2:30pm on Sunday afternoon.

Instead of seeing ads asking “Can anyone beat the trio of Harvick, Busch and Truex?” or something along those lines we have seen numerous promotional spots proclaiming that “Dale Jr. has traded his racing helmet for a microphone”.

Rarely has the broadcaster been promoted as more of a star than the broadcast itself. Perhaps ESPN used this approach to some degree when Jon Gruden was brought in to cover Monday Night Football for that network or Harry Carey was regarded more highly as a broadcaster than some of those terrible Chicago Cubs teams he announced for a few decades ago. But considering that NASCAR’s TV ratings have bounced around in the ‘all-time low’ category for much of the first half of 2018, NBC appears to be banking on the popular personality commenting of the racing over the racing itself.

All of this brings up a few questions in the mind of this writer:

I am truly interested in seeing how this plays out and finding out next week whether or not more people watched the Overton’s 400 than the previous airings of this season. Further, once the novelty of Junior in the booth wears off, can any ratings boost that might initially occur be sustained?

The Chicagoland Speedway represents to some longtime fans all that brought about the downward spiral of NASCAR’s popularity. It is one of the 1.5 mile ‘cookie cutter’ tracks that many fans regard with disdain. It is located outside of the traditional southeastern home of the sport. And, it has very little ‘character’ that would set it apart from any other track and cause this to be a “Must See” event.

So, if NBC’s ratings for this race and those that follow over the next few weeks experience an upward surge, we will know that the ‘Junior Effect’ gamble by the network paid off, at least in the short term. If not, then we may be back to square one as far as reversing the current trend of having fewer viewers goes.