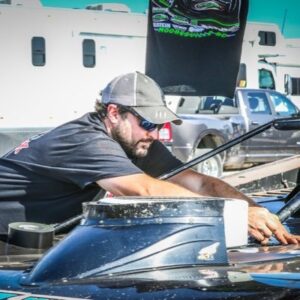 To say that there is very little time during the so-called off-season for Dirt Late Model teams to prepare for what lay ahead of them in the coming campaign is very much of an understatement. And add to that, some teams even take on the extra work load of competing in races during the months of November and December while others stay inside their shops fine tuning their race cars.

Vinny Guliani serves as the crew chief for the Craig and Shannon Sims-owned PCC Motorsports operation for driver Kyle Strickler and that team has opted to take the route of racing during the winter months to serve as preparation for their upcoming Lucas Oil Late Model Dirt Series campaign. And while the workload is great, the pit boss believes his team has made the right decision.

With the new PCC Motorsports team, Strickler has recorded two third-place finishes in the first two events on the Drydene Xtreme DIRTcar Series schedule. The six-race winter tour began in November with the Blue-Gray 100 at the Cherokee Speedway in Gaffney, SC then moved to Bulls Gap, TN and the Volunteer Speedway for the ‘Grinch at the Gap’ race. The Guliani-prepared Rocket Chassis race cars had Strickler in contention for the win on both occasions.

But with a new team that is about to take on the rigors of the Lucas Oil Late Model Dirt Series, why add races during what is supposed to be the off-season to the schedule?

“We discussed the positives and negatives at length,” Guliani explained in an interview with InsideDirtRacing.com. “We were just going to see how it went. We went and tested and were absolutely terrible so we worked our butts off and we tried to make some sense of what we had. We managed to get a good finish at Gaffney then we decided we had to keep working because the biggest thing was we didn’t want to go to SpeedWeeks testing without any laps on the Rocket. That was our theory behind running these races. It wasn’t as much of us committing to running for the points as it was us getting some laps under our belt with the Rocket. As difficult as it was, especially with me being sick, it was the right choice because we had a lot of work to do on the cars. Even though the results were the same with the third-place finish, the car was much better at Bulls Gap than it was at Gaffney.”

Prior to joining forces with Sims, Strickler and Guliani had raced with Longhorn Chassis. The crew chief believes the information they have gleaned from the laps turned at Cherokee and Volunteer with their new machine will allow them to be more prepared when the 2021 LOLMDS season kicks off.

“Now we’ve got more of a baseline to build off of where can do some more R&D in the off-season with the pull-down rig, laser scanner, and that sort of thing,” Guliani pointed out. “That’s what we’ll do in the three weeks we have off to get prepared for Gaffney(Xtreme Series) on January 9th then the week after that we go right into Volusia to race with the World of Outlaws. If you go into off-season testing and you’re not very good, it’s a really quick turnaround for SpeedWeeks. Our theory was that we would run three races before Christmas and use the three-week off-season to do our R&D so that we’re at least in the ballpark when we go to test at Tampa(East Bay Raceway Park) and Brunswick(Golden Isles Speedway) so we can hit the ground running when those first points races come around.” 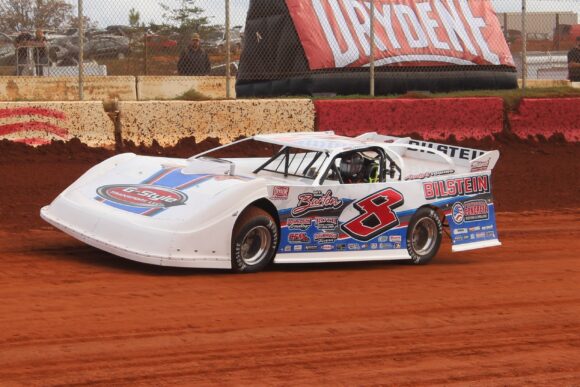 Guliani’s love for racing began at an early age. Born in California to parents who were both engineers, he grew up in Nebraska and ultimately attended college in North Carolina where he earned an engineering degree. After working in various forms of racing, including NASCAR, the 34-year-old has grown to love working on Dirt Late Models most.

When everything settles down for the brief three-week stretch that can be called an off-season, Guliani has a number of tasks he wants his team to accomplish before getting back on track.

“This is a unique off-season because we have a new team,” he noted. “Kyle and I were hired by Craig Sims and PCC Motorsports so now we have a whole new program, a new rig, obviously new cars, new motors, we’re shuffling the crew, so this is a unique off-season. The number one thing is to work on our truck and trailer to get it organized to live in for going down the road. I’ve been doing that a lot over the past two weeks anyway because we’ve been racing and you’ve got to have your stuff in there. There’s some special projects we want to do on the truck anyway, and in the off-season, that goes to the top of your list. You’ve got to make everything in the hauler as comfortable and simple as you can because you load and unload hundreds of times and you spend a lot of nights in that truck.”

Guliani began working with Strickler in March of 2020. Prior to that he had aided drivers such as former World of Outlaws Morton Buildings Late Model Series champion Shane Clanton and former WoO Late Models regular Chase Junghans. During his time in racing, he has developed his own manner of doing things for the purpose of making the most efficient use of time. 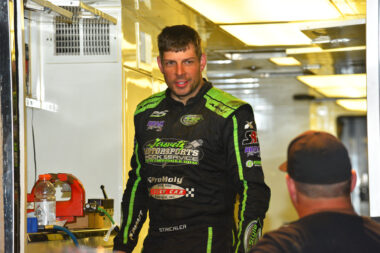 And importantly, when bringing new crew members onto the team, Guliani has certain personalities in mind that will best suit his way of doing things.

“Kyle and I get along with most people but there’s definitely a personality part to it,” he said. “They’ve got to be somebody that you can hang out with and stuff, for sure. Experience is a big thing. I like my program run a certain way. I like things washed a certain way, I’m OCD in that I like things put away so it’s got to be somebody who is okay with doing things the way we want them done because, from experience, I’ve been down all these paths so I know what is the most efficient wash procedure, the most efficient load and unload procedure, and all those little things that add up to giving you more time to work on speed. We’ve got three really good guys right now so we’re really pleased with that.”

Guliani is also pleased with the progress his team has made as far as the adjustment to being a part of a new organization goes. That progress will allow the short off-season to go as smoothly as possible.

“As far as racing, one of our cars is brand new,” he explained. “Saturday(Volunteer) was only the second race on it so the normal things you would have to do as far as maintenance, you don’t have to do on that car. The other car, I wouldn’t call it off-season maintenance, it’s just maintenance. There’s things that you do every fifteen races or even every ten races. It’s not necessarily because it’s the off-season, it’s just due for it. We’re in a pretty good spot because we’ve got the two Rockets and the Longhorn race ready going into the off-season because we’re racing in the off-season. There’s a couple of projects in the shop, but again, we’ve been tackling those projects through the year so we’re not really looking at this off-season the way most teams would. We’re just looking at it like a couple of weeks between races. Every week we’ve been working to get everything more organized, so for us, it’s just business as usual.”

In terms of making the switch from Longhorns to Rockets, the veteran crew chief says there is absolutely a difference in working on the two brands.

“There’s definitely a difference,” he declared. “It’s an eyeball thing for me. There’s a certain attitude that Longhorn wants to be at to be its best. And there’s a certain attitude the Rocket wants to be at. For working on them, you definitely do different things on your load numbers, your geometry, and I’ve been comparing the two a lot because we were running really well with our Longhorn stuff.

“I had success with the Rocket stuff with Chase Junghans, which is who I worked for before Kyle, and I’ve worked on Rockets through the years. You know you can make them fast, they’re great cars. You’ve just got to learn those differences, the posture that it wants, the load numbers, the geometry, the measurements. Ultimately, it’s a race car and that’s the fight you have in your head if you do something that you think should work on every race car and should do a certain thing but you’re definitely learning as you go.”