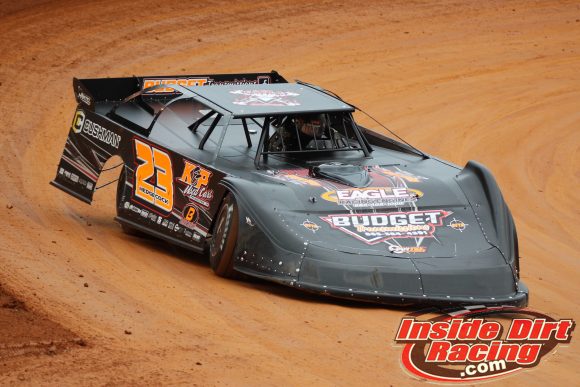 The American Crate All-Star Series rolled into the 411 Motor Speedway to contest the 8th Annual J.T. Kerr Memorial on Saturday evening. At the end of the night it was Cory Hedgecock who survived a caution plagued feature to leave the Seymour, Tenn. facility with the $5,000 winner’s payoff.

It was the Loudon, Tenn. driver’s fourth consecutive victory in the J.T. Kerr Memorial.

Jesse Lowe led the way in qualifying as he posted a lap of 14.135 seconds around the 3/8 mile clay oval to beat out Zach Sise, Jensen Ford, Cory Hedgecock, Rusty Ballenger and Anthony White. Those six drivers were locked into a fast car dash that would set the first three rows of the starting grid for the feature race.

On the initial attempt to start the dash race Sise hit the turn two wall bringing out a caution. With the No. 9 car unable to continue, Hedgecock was moved up to the outside of the front row. From there, the driver of the No. 23 machine went on to win the dash and claim the pole position for the feature. Ford, Lowe, White, Ballenger and Sise placed in positions 2-6 in the dash and would start the main event in that order.

The top-4 from each of three heat races would also transfer to the main event.

At the start of the 40-lap feature it was Hedgecock who went to the early lead with Ford, Lowe, White and Long trailing in his tire tracks. Both Long and Trevor Sise began to move forward immediately as each passed by white to take fourth and fifth respectively. But it was at that point when a rash of yellow fever struck the event.

No fewer than 11 caution flags would wave over the event for crashes, spins, flat tires and mechanical failures.

On each restart Hedgecock would maintain control of the race while those behind him either traded positions or faltered. The racing behind the leader would be intense at times with no green flag run lasting for more than nine laps, there were constant interruptions.

The most significant yellows of the night occurred on a lap 6 restart when fourth running Trevor Sise spun but was given his spot back as series officials deemed that he was the victim of rough driving. As a result, White was sent to the tail of the field.

And with just two laps remaining, Ballenger slammed the turn two wall, possibly due to a failure on his car, as he raced alongside Lowe for the second position. Ballenger walked away from the incident under his own power.

But in the end it was Hedgecock who ruled the day and no other driver ever mounted a serious threat to wrest the lead away as the No. 23 ultimately sailed under the checkered flag to score the victory.