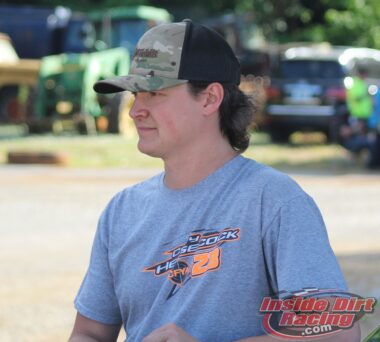 Going into the Valvoline Iron-Man Late Model Series event this past Saturday night at the I-75 Raceway there was one driver who stood out as a potential favorite. The Sweetwater, Tennessee track was hosting the biggest race in its history with a $12,000 winner’s purse that also offered the opportunity for one driver to earn a $3,000 bonus on top of that.

Cory Hedgecock from nearby Loudon, Tennessee has turned many laps on the third-mile layout and has had more than his share of success there. Even with the likes of top drivers such as Chris Ferguson, Ross Bailes, Iron-Man points leader Jensen Ford, and up-and-coming standout Eli Beets expected to compete, many observers believed the No. 23 Black Diamond Chassis would be difficult to beat.

“It feels just as sweet as it sounds,” Hedgecock told InsideDirtRacing.com when asked how his most lucrative victory felt. “Just happy. These big ones are hard. Ten granders are hard but anything above twelve just adds another level of nervousness to me. I was nervous there because I know Ferguson is a good racer, Jensen is good here, Eli’s been good. We got lucky, but I’ll take it. We had speed all night but everything just fell right with the lapped cars when I caught them. I never really got jammed up with them so we’ll take it.”

Considering the past success of Hedgecock at I-75, there were high expectations for the 29-year-old driver. Perhaps no one had higher expectations than the driver and his family team going into the race. As a result, the driver who won a World of Outlaws Morton Buildings Late Model Series feature at 411 Motor Speedway back in 2018 admitted that he sometimes experiences jitters leading up to races, but once the engines fire, he’s ready to go.

“I don’t get my hopes up until the feature,” Hedgecock explained of his expectations. “I don’t really put pressure on myself until I have an opportunity to be in a position to take advantage of it. It’s just weird, yeah, I get nervous but it’s just that I don’t really feel it until I’m in the car. But when I get in there and they’re lining everybody up that starts to calm me down. Then when we fire, I’m okay.”

The previously mentioned $3,000 bonus was available for any driver who could post the fastest overall time in qualifying then win his heat race and go on to claim the checkered flag at the end of the 50-lap feature. As a result of the possible bonus, Hedgecock was extremely focused on qualifying because that was the key to having a chance to earn the extra money.

Stacy Boles was fastest in Group A time-trials with an effort of 14.564 seconds. When Hedgecock rolled out for his qualifying laps in Group B, he knew the time he had to beat to be eligible for the bonus bucks. In fact, Hedgecock did better the time posted by Boles as he toured the clay oval in 14.529 seconds which not only gave him the overall fast time but placed him on the pole for his heat race.

Recall that Hedgecock had to win his heat to be eligible for the bonus. As he waited for his own preliminary race to take to the track, the observant driver noticed that the outside front row starter in each of those previous races was able to take the lead when the green flag waved. 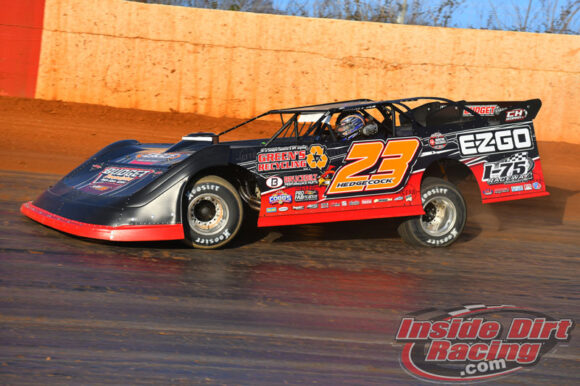 Cory Hedgecock earned his biggest payday at I-75

“Then the first two heats rolled out and neither one of the pole guys got the lead on the start,” Hedgecock pointed out. “I know Stacy still ended up winning(the first heat), but it makes you more nervous at the start knowing the pole didn’t seem to be the best place to start. But we fired off good and I found some brown on the start and got in front of Ryan(King) on the start and cruised.”

His work in the preliminaries earned the No. 23 an outside front row starting position for the main event. But that did not mean his worries were over. Slower traffic on the tight I-75 layout can always be a challenge but Hedgecock and his crew passed the test.

“Starting on the outside pole, it’s a fine line to walk for me,” the driver pointed out. “I like leading, don’t get me wrong. But it’s so much easier running second because you know what the other guy is going to do in lapped traffic and stuff like that. We had worked on our car a little bit before the feature and dialed her in and led all 50.”