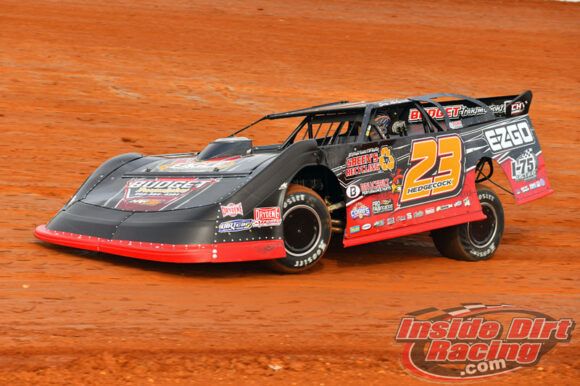 They say it’s sometimes better to be lucky than good. On Friday night at the Beckley Motor Speedway, Cory Hedgecock was both lucky and good. The 18th annual Schaeffer’s Oil Southern Nationals kicked off their two-week campaign in the Black Gold 53 at the bullring located in West Virginia. When all was said and done, Hedgecock captured the victory after misfortune befell the first and second place runners early in the race.

The Black Diamond Chassis driver from Loudon, Tennessee earned $10,053 for his efforts at the Beckley, WV track in a race aired live by FloRacing.com.

A total of 31 cars were signed in for competition

Feature Re-cap: When the 53-lap main event got underway it was Winger who was leading the pack with Ferguson, Roland, Ford and Hedgecock in his tire tracks. Hedgecock got by Ford for fourth on the second lap as Winger and Ferguson looked to slip away from their pursuers.

Winger and Ferguson then engaged in a fierce slide job swapping fight for the lead between laps 10 and 14. Then a caution on lap 17 for a spin by Coghlan changed the whole complexion of the race. As the cars circulated around the track both Winger and Ferguson were forced to the pit area because of flat tires. Both had to restart at the tail of the field while Hedgecock inherited the top spot.

After the restart, the top-5 of Hedgecock, Roland, Ford, McDowell and Hawkins looked to separate themselves from the field. And most of all, it would be Hedgecock who would do that as he built a lead of more than three seconds as the laps clicked away.

However, with the final 36 circuits being run caution-free, slower traffic was bound to come into play and it did over the race’s second half. Ford cut into the advantage Hedgecock had built but he too had to deal with slower cars and was never able to pull within striking distance.

In the end, it was Cory Hedgecock who would sail under the checkered flag to claim victory.