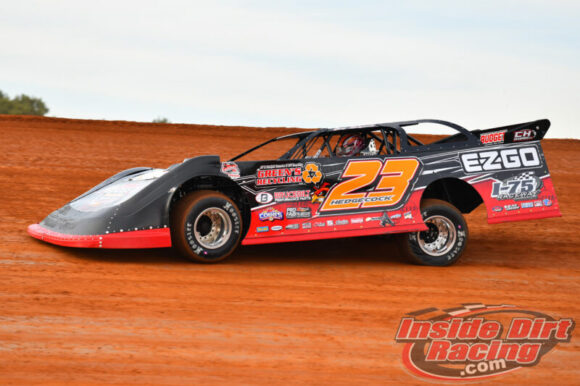 The Valvoline Iron-Man Late Model Series completed a two-race weekend on Saturday night at the I-75 Raceway. After a hurried night due to a threat of precipitation it would be Cory Hedgecock who led from green to checkered to claim the winner’s trophy in Sweetwater, TN. The Loudon, TN driver collected a winner’s check valued at $4,000.

There were a total of 23 cars signed in for competition.

Cory Hedgecock was fastest in Group A qualifying with a time of 14.508 seconds around the third-mile clay oval besting Colton Proffitt, John Llewellyn, Ray Cook, Garrett Smith, and Bobby Giffin.

Jensen Ford led the way in Group B time-trials and overall by touring the track in 14.338 seconds to top David Crabtree, Skip Arp, Glenn Vanover, Heath Hindman, and Jamie Oliver.

There were no heat races as all 23 cars were permitted to start the main event.

At the start of the 40-lap feature it was Hedgecock who quickly assumed the lead of the race with Proffitt, Crabtree, Ford and Llewellyn trailing in his wake. Cook wrested the fifth position away from Llewellyn on the second circuit then Garrett Smith passed by Llewellyn one lap later for sixth.

Crabtree and Ford moved around Proffitt and grab the second and third places respectively just before a lap 4 caution for a spin by Tim Rucker briefly slowed the pace of the race. On that ensuing restart, a multi-car tangle either damaged or took out Hindman, Dusty Carver, Benji Shaw, Jamie Oliver, Steve Smith and Dakota Smith.

When green flag action resumed, Garrett Smith and Cook staged a battle for the fifth spot that carried on for multiple laps before Smith emerged with the position.

With the race running caution free after lap 4, it looked initially as if Hedgecock would drive away from the field. However, Crabtree and Ford eventually tracked the leader down as all the top running machines worked through slower traffic.

Just after the halfway mark the top-3 of Hedgecock, Crabtree and Ford with in tight formation. On lap 27, Ford slipped by Crabtree then moved in to threaten Hedgecock’s reign. But eventually, the No. 23 car would gain some breathing room over his pursuers and ultimately cruise under the checkered flag for the win. 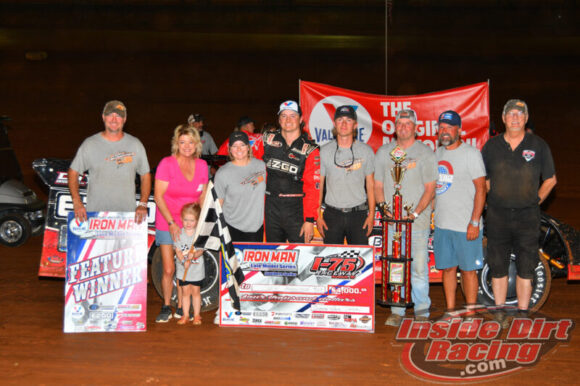 Hedgecock with crew and supporters in victory lane