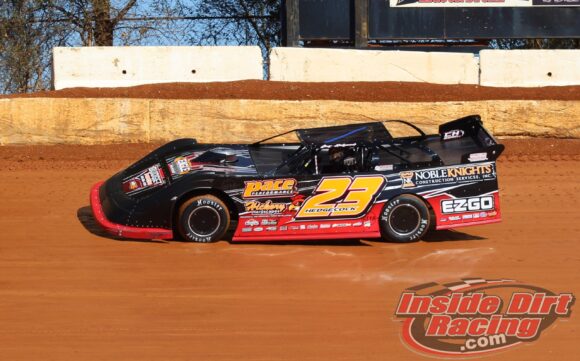 Cory Hedgecock led all the way for the win

If there’s a race at 411 Motor Speedway, Cory Hedgecock has to be considered a favorite to win. And that’s exactly what he did on Saturday afternoon in the Super Late Model portion of the Sweetheart event. The No. 23 car started from the pole position and went on to lead all the way in a race that featured a long stretch of green flag laps.

The Black Diamond Race Cars driver from Loudon, Tennessee picked up $5,000 for his efforts at the 3/8 mile track located in Seymour, Tennessee.

Feature Account: When the green flag initially waved over the 40-lap feature a multi-car spin involving the likes of Hanger, Hindman and Cook immediately slowed the action. Because the mishap involved more than one car, the lineup was restart was returned to the way it had been.

The race would then see 36 consecutive laps of green flag action as Hedgecock jumped to the lead with Seawright assume second while Hindman, Ford and Hanger rounded out the top-5. Ford went on the move in the early going as he challenged Hindman for third on lap 3. The No. 83 car would soon grab the position.

Further back, Cook entered the top-5 by passing Hanger. At the same time, Herrington had risen from his 11th starting position to seventh.

Cook continued to move forward as he took fourth from Hindman on lap 23. Meanwhile, Hedgecock continued to lead while Ford closed in on Seawright for second. On lap 25, the reigning Valvoline Iron-Man Late Model Series champion made his way by Seawright to claim the runner-up spot.

Hedgecock found himself mired in heavy traffic on lap 28 but he was able to negotiate well enough that his pursuers were unable to close.

A lap 36 caution for the spinning car of Weaver set up a late dash for the finish. But ultimately, no one was able to corral the leader which allowed Hedgecock to sail under the checkered flag to score the victory.

Click on the play button below to listen to a post-race interview with feature winner Cory Hedgecock: