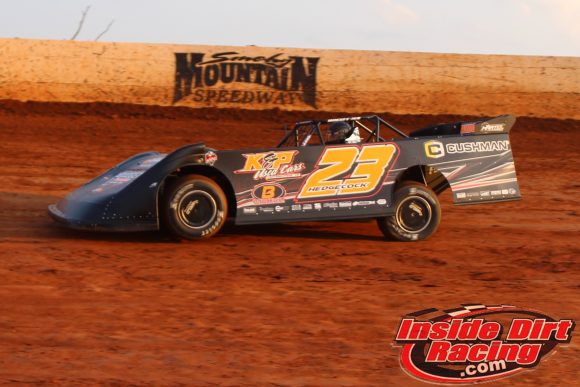 Along with the American Crate All-Star Series the Smoky Mountain Speedway also staged racing in the topless running Limited Late Model division. Cory Hedgecock came away from the Maryville, TN track with a winner’s check valued at $2,000.

David Crabtree set the pace in qualifying among the 19 cars signed in for competition by posting a lap of 17.454 seconds around the 4/10 to beat out Cory Hedgecock, Chase King, Jason Cardwell, Jason Trammell, Jordan Rodabaugh, Bobby Giffin, Ryan King, Roger Best and Justin Owens.

The field for the main event was set entirely from time-trials.

At the start of the 30-lap feature it was Hedgecock who jumped out to the early lead with Crabtree, Chase King, Rodabaugh and Cardwell following in his tire tracks. However, a lap 3 caution for top-10 running Trammel stalling on track slowed the action.

On the lap 3 restart Chase King moved around Crabtree to assume the runner-up position while Ryan King took sixth away from Giffin just one circuit later. All the while, Hedgecock was motoring away from the pack until another caution on lap 9 again brought the field back together.

The lap 9 restart saw Cardwell move around Crabtree to take third with Ryan King also following suit and grabbing the fourth spot. Crabtree’s night would get worse on lap 14 when his car stopped on track and he was forced to retire from the event.

Hedgecock built a lead of almost a full straightaway while Cardwell harassed Chase King for the runner-up spot behind the leader. But one final yellow flag would provide his pursuers with a final shot at Hedgecock with just two laps remaining in the feature.

But to no avail, Hedgecock drove on to the checkered flag without ever having faced a significant challenge for the top spot.