Cory Hedgecock dominates for Sweetheart of a victory at 411 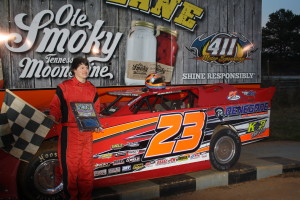 Cory Hedgecock has become a fixture in the 411 victory lane.

Cory Hedgecock’s name is becoming synonymous with victory in the Limited Late Model division at the 411 Motor Speedway. As a matter of fact, the Loudon, Tenn. driver has won the last three special events for that class on the Mitch and Tanya McCarter owned track.

On Saturday afternoon, the rising Late Model star added the Sweetheart 52 to the 2013 season ending National Steelhead Championship and the 2014 season opening Hangover to his list of conquests on the Seymour, Tenn. clay oval. Unfortunately for Hedgecock, the Limited Late Model class is going away as the track’s feature class with NeSmith Crate Late Models assuming that role.

Initially, it was Ryan King who looked to wrest the title of 411 front runner away from Hedgecock. King laid down the fastest lap of the day in time-trials with an effort of 14.495 seconds around the 3/8 mile facility. Hedgecock was second quick with a lap of 14.557 seconds. Both of those driver were locked into the feature lineup while all others were relegated to heat races.

At the start of the 52-lap feature, Hedgecock immediately shot to the lead from his outside front row starting spot with King, Hixson, Henry and Walker Arthur in hot pursuit. A series of early cautions kept the field tightly bunched and the leaders out of heavy traffic during the early going. The most significant early yellow flags came on a lap 9 restart when Henry spun and collected fellow top-10 runners Jason Manley and Ruben Mayfield. Another noteworthy caution occurred when contact between King and Mack McCarter sent the latter for a spin on lap 12.

The race ran green from lap 12 to lap 31 with Hixson challenging Hedgecock for the top spot in traffic. Eventually, however, the No. 23 machine would separate itself from the competition.

In other action on a day in which the late Scott Sexton was honored, Heath Alvey used a bold early move to take the lead in the Sportsman class and hold off Wayne Rader and Kip Sawyer for the win in a caution plagued event.

Shannon Emery drove away for the victory in Street Stocks over Lynn Phillips and Charlie Bates while Michael Courtney held off Rocky McNabb and Mike Townsend in the Mini Stocks.