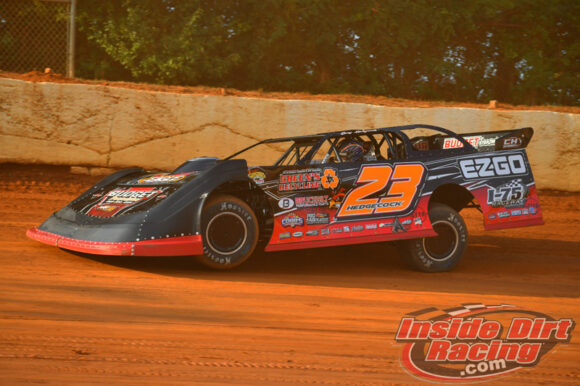 Cory Hedgecock turned in a dominant performance at 411

The Schaeffer’s Oil Southern Nationals headed into its penultimate points-paying race on Friday night at the 411 Motor Speedway. After taking the lead during the first half of the feature, Cory Hedgecock dominated the race’s second half to go on for the victory. The Loudon, Tennessee driver earned $10,053 for his efforts.

Ryan King was fastest in Group A qualifying after he toured the 3/8 mile clay oval in 14.025 seconds topping Cory Hedgecock, Robby Moses and Pierce McCarter.

Jensen Ford proved to be quickest in Group B time-trials with a lap of 14.052 seconds beating out David Crabtree, Sam Seawright and Mack McCarter.

Ross Bailes secured the pole for the feature by winning the first heat race of the night ahead of Ryan King, Randy Weaver and Michael Chilton while Pierce McCarter was the victor in the second preliminary by besting Cory Hedgecock, Dale McDowell and Vic Hill.

Heath Hindman and David Payne won the two B-main races used to set the remainder of the starting grid for the main event.

At the initial attempt to start the 53-lap feature, fifth starting King attempted a three-wide move that ended with a spin in turn three which resulted in the No. 1G being sent to the tail for the next attempt at a start.

When the race went green for the second time, it was Bailes who shot to the early lead with McIntosh, Hedgecock, Overton and Weaver trailing. Just outside the top-5, Pierce McCarter and McDowell fought over the sixth position.

Hedgecock challenged McIntosh for second on lap 3 with both of those cars moving in on race leader Bailes. The top-3 cars ran in tight formation as each looked for traction and an advantage. Just behind that fight, Overton and Weaver contested the fourth and fifth positions.

Hedgecock asserted himself on lap 12 when he passed by McIntosh to grab the runner-up spot. But he would not stay there long as the No. 23 took the top spot on the leaderboard when he moved around Bailes on lap 14. And immediately, Hedgecock began to pull away from the pack.

By lap 19, Hedgecock had already built a lead of a straightaway. Further back, Weaver began to charge forward when he took fourth away from Overton and lap 25. Seven laps later, the veteran racer wrested the third position from McIntosh. He then went by Bailes to take second immediately after passing McIntosh.

But the was no match for Hedgecock as he led by half the distance of the track over second running Weaver while McCarter, McIntosh and Overton battled at the back of the top-5.

In the end, Hedgecock cruised under the checkered flag to score the win. 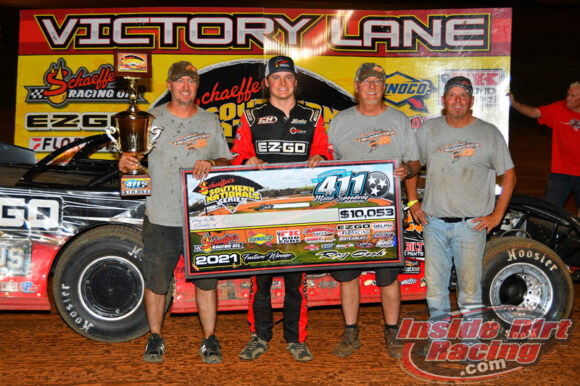 Hedgecock and crew in victory lane