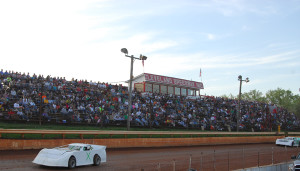 Once again, the fate of the Cleveland Speedway was to be decided in U.S. Federal Bankruptcy Court in Chattanooga. And once again, the matter was postponed. On Thursday(1-9-14), a hearing was scheduled to take action on the track, which has been already delayed on two other occasions, but a new date was instead set for February 27th.

Previous hearings had been scheduled for December 12th and 19th of last year but no action was taken on either of those dates as the trustee in the case worked to negotiate with potential buyers for the property.

The facility was operated as a partnership between Monty Morrow and Ronnie Willkomm between 2004 and 2011. The track filed for Chapter 11 bankruptcy protection back in 2011, at which time Willkomm became the sole operator. After that filing, the track was given a time period of two years to show that it could turn a profit and make progress toward settling its debts.

Jerry Farinash, who is serving as the trustee in the case, says that his job is to secure as much money for the property as he can to satisfy the debts held against it. “My choices are that I pay creditors more money and it’s not a speedway, then that’s the choice I have to make,” he declared on Thursday in an interview with Chattanooga television station WDEF. “We don’t have a really good feeling that anybody is going to come forward and offer enough money to buy it and continue to operate it as a speedway.”

Since the time of the previously scheduled hearing, one potential group hoping to buy the historic racing venue has moved on. Chattanooga businessman David Duplissey and veteran racer Dale McDowell had tried to negotiate a purchase of the track for the purpose of maintaining it as a racing facility but grew frustrated with those efforts and instead bought the nearby Boyd’s Speedway.

In an interview with this website, McDowell stated that “We had been working on a deal to buy the Cleveland Speedway for about four months and we just weren’t able to come to an agreement with what he(Duplissey) was wanting to pay and what they were asking for a purchase price.”

At the same time, a story was floated that Chattanooga real estate developer Marcus Lyons was interested in taking over the facility for purposes other than racing. The developer of apartment complexes seemingly has(or had) similar designs on the property located at 2420 S. Lee Highway in Cleveland. However, it remains unclear as to whether his reported $1.1 million offer still stands.

The problem the track faces now, should it continue as a racing facility, is that the season is fast approaching. The Southern All Stars Dirt Racing Series has five events scheduled to take place at the track in 2014. The first of those races has been set for March 22, which is less than one month from the next court date for the track.

In the meantime, maintenance to the facility has gone undone as the debate over the future of the property continues.

With each passing day, the fate of the Cleveland Speedway appears to grow more and more clouded. The track has hosted racing events since 1954, but whether there will ever be another race there has yet to be decided.