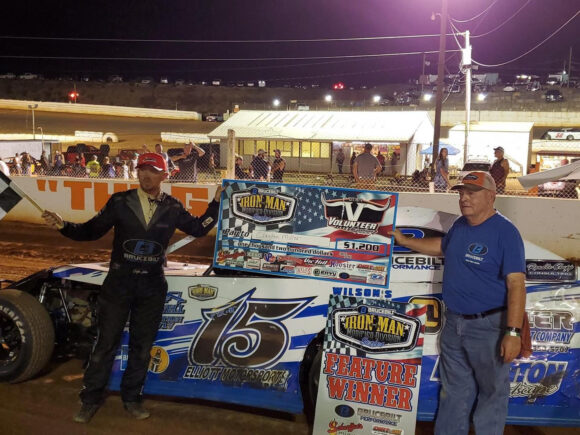 BULLS GAP, TENNESSEE (August 1, 2020)– The Brucebilt Performance Iron-Man Modified Series would return to action on Saturday evening at Volunteer Speedway in Bulls Gap, TN and defending series champion Clayton Miller of Elkton, KY would lead all twenty-five laps of the contest on the way to scoring a $1,200 payday.

The start of the main event would see the caution flag wave before everyone completed the opening lap when third-place starting Brian Skaggs would spin in turn four.  The next attempted start would see action go green with Clayton Miller taking the race lead, followed by Brandon Kinzer, Nick Stroupe, Jeff Hamby, and Wayne James.  With Miller and Kinzer pulling away slightly and Stroupe maintaining third, the great battle would begin for fourth between Hamby, James, and Blake Brown.  However, the caution would wave again on lap five when Brown spun his entry in turn four.  Miller and Kinzer would remain first and second on the restart, while James would go to third, but a spin by Brandon James on lap seven would slow the action once again.  This restart would see the top five remain the same, with Miller and Kinzer putting some distance back to now-third place running Stroupe, who would take third on lap ten.  The front pair of Miller and Kinzer would set to start working lapped traffic when another caution would appear and only one more caution period would slow the action.

Miller and Kinzer would again pull away from the pack, with Kinzer peeking beneath Miller on several occasions in an attempt to take the lead, but would never be successful with his efforts.  Miller would see the checkered flag wave first, with Kinzer taking runner-up honors, while Stroupe would complete the podium finishers with a third-place effort and a late race battle with Hamby and Jody Puckett, who would finish fourth and fifth respectively.  The remainder of the top ten finishers would see Blake Brown recover from his lap five spin to charge back through the field to finish sixth, while Wayne James, Jimmy Dalton, Jesse Rupe, and Joey Cotterman would trail behind Brown.

The Brucebilt Performance Iron-Man Modified Series next events will be Friday August 14 at Crossville Speedway in Crossville, TN and Saturday August 15 at I-75 Raceway in Sweetwater, TN.  Both events will pay $1,200 to win and $125 to start.