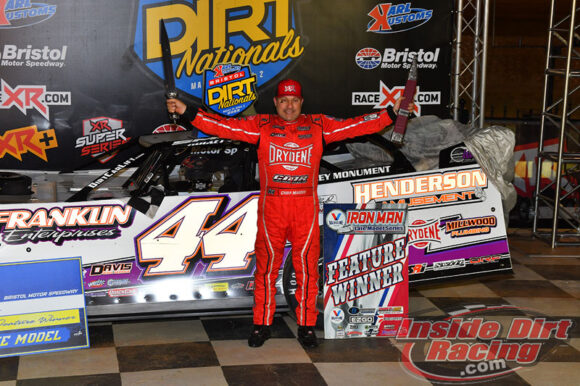 Chris Madden ended last season on a roll and has carried that momentum into the early part of the 2022 season. And that became abundantly clear on Friday night at the Bristol Motor Speedway. The veteran driver claimed the first ever XR Super Series checkered flag in convincing fashion by winning the event co-sanctioned by the Valvoline Iron-Man Late Model Series.

This was the beginning of a four-race event on the dirt covered NASCAR track as part of the second annual Karl Kustoms Bristol Dirt Nationals at the track located in the hill country of upper east Tennessee. The Rocket Chassis driver from Gray Court, SC earned $50,000 for his victory.

Feature Account: When the race took the green flag Madden bolted to the lead ahead of Weiss, Owens, McDowell and Pearson. A crash just after the first lap ended the efforts of Ford and Chilton as both cars suffered extensive damage.

When the race restart, Joiner moved around Pearson for sixth. In the meantime, Davenport came roaring up from his deep starting position into the top-10 by lap 5. By that time, Madden had already built a big lead as he began to approach the tail of the field.

The leader’s advantage over Weiss only continued to increase as McDowell and Owens fought over the third position. Overton began to move forward by lap 18 as he passed by Owens for fourth.

As the race approached the halfway mark, Weiss, McDowell and Overton ran in tight formation for second through fourth. Overton shot through his two rival to take the runner-up spot but that gain would be short lived as McDowell took second away one lap later.

Madden pulled further away from the pack as the laps clicked away. Further back, Davenport finally worked into the top-5 with 10 laps remaining.

But in the end, it was all Madden as he cruised under the checkered flag for the victory and the big payday.