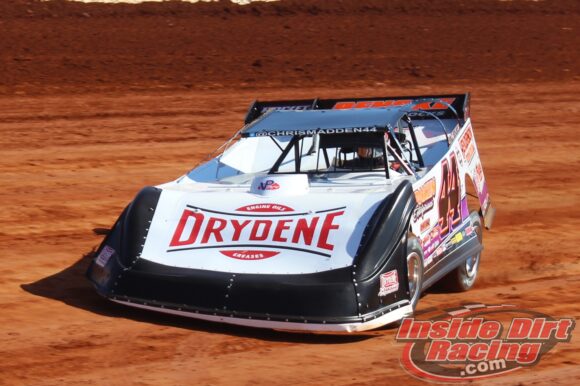 Chris Madden led all the way to get the win

The Drydene Xtreme DIRTcar Series took to the ‘Place Your Mama Warned You About’ in Gaffney, SC on Sunday to contest the fifth event on its six-race 2020-21 schedule. After Ross Bailes took the win on Saturday night at the Lake View Motor Speedway in Nichols, SC, it was local hero Chris Madden who rolled into victory lane at Cherokee Speedway. The Gray Court, SC  driver earned $5,000 for his efforts.

A total of 29 cars signed in for competition.

Kyle Strickler was quickest in qualifying with a lap of 14.985 seconds around the 4/10 mile clay oval beating out Zack Mitchell, Cla Knight, Adam Yarbrough, and Brett Hamm.

Kyle Strickler was the winner of the first heat race of the day after he bested Chris Madden, Adam Yarbrough, Josh Richeson and Anthony Sanders.

It was Ross Bailes who beat Trent Ivey, Michael Rouse, Dillon Brown and Cla Knight to the finish line in the third and final heat of the day.

The Xtreme Series redraw set the first three rows on the starting grid in the order of Bailes, Madden, Wilson, Ivey, Strickler and Mitchell.

At the start of the 40-lap feature it was Madden who jumped to the early lead with Bailes, Wilson, Strickler and Ivey in pursuit. Mitchell moved around Strickler to grab fifth on the second circuit.

The top-5 cars made their way to the bottom lane of the track and were already encountering slower traffic by the end of lap 5.

Madden avoided what could have been serious trouble on the sixth lap when Yandle spun in front of him and narrowly avoid an accident. On the lap 6 restart, Wilson got by Bailes to claim second as Madden again drew away from the pack.

Strickler, who entered the day trailing Madden for the overall lead in the series standings, jumped to fourth during a lap 7 restart. Further ahead, Bailes and Wilson battle for the second spot with Bailes prevailing just before Wilson suffered a flat tire on lap 14.

The race settled into a follow-the-leader contest throughout its middle stages with Madden building his advantage as he cut through slower traffic.

Late in the going, however, tires would become a factor. A lap 36 caution flag waved when Dennis Franklin had a right rear to go down. Two laps later, the top-5 running car od Ivey suffered the same fate.

Finally, it was two drivers with the top-10, Mitchell and Michael Brown who had tires to go down on that final restart. Ultimately, Madden would cruise to the checkered flag over the final two laps.