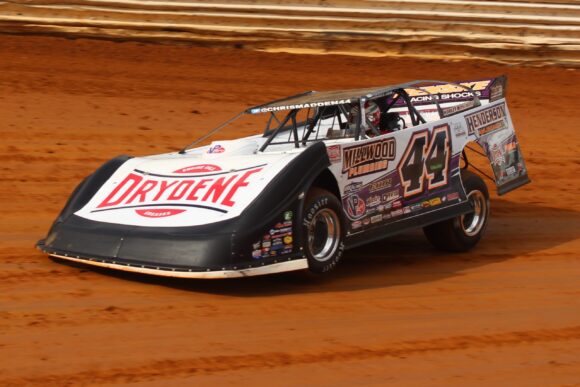 The Drydene Xtreme DIRTcar Late Model Series rolled into the Volunteer Speedway on Saturday afternoon to contest their second of six races on this winter tour. At the end of the day it was Chris Madden who claimed the victory after taking the lead from Scott Bloomquist then leading the rest of the way. The Gray Court, SC driver earned $5,000 for his efforts.

Daulton Wilson led the way in qualifying as he set a new track record with a lap of 11.794 seconds around the 4/10 mile clay oval. That mark bested the times of Chris Madden, Kyle Strickler. Christian Hanger and Anthony Sanders.

Kyle Strickler drove to victory in the third heat ahead of Scott Bloomquist, Donald McIntosh, Adam Yarbrough and Tim Vance.

The Xtreme DIRTcar redraw placed Wilson on the pole for the main event with Bloomquist, Hanger, Strickler, Sanders and Madden in order.

At the start of the 40-lap feature it was Bloomquist who went to the early lead with Wilson, Strickler, Madden, and Sanders in tow. Hanger had trouble early on as he banged into the turn 2 wall after apparently losing a wheel.

Madden jumped to second on the ensuing restart with Strickler coming to third with Wilson slipping back. Madden began to harass Bloomquist for the race lead on lap 7 then finally made his move to gain the top spot on lap 9. One lap later, Bloomquist slowed and pulled off the track to end his day.

Bloomquist’s retirement elevated Strickler to second behind Madden. At that point, the lead duo began to pull away from Wilson, McIntosh and Hicks until a lap 18 yellow flag slowed the pace.

Another caution flag was shown to the field on lap 24. Shortly after that restart, McIntosh used a slide job maneuver to wrest the runner-up position away from Strickler. From that point, Madden maintained a relatively comfortable margin as he eventually sailed under the checkered flag to score the win.

It was Madden’s second consecutive win in the Xtreme DIRTcar feature at Volunteer.