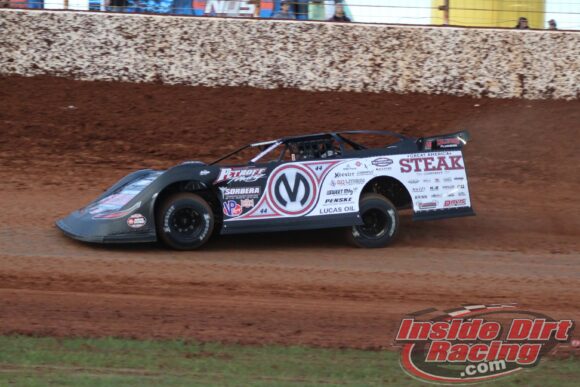 The World of Outlaws Morton Buildings Late Model Series opened its 2020 season on Friday night at Vado Speedway Park. Chris Madden kicked off the new season by collecting the $5,000 first prize for his first win of the campaign by beating the man many say he will have to fight for the overall series title in the person of defending champion Brandon Sheppard.

Chris Madden set the pace in Group A qualifying with a lap of 14.472 seconds around the 3/8 mile clay oval to beat out Ashton Winger, Darrell Lanigan, Ricky Weiss and Billy Moyer, Jr.

Brandon Sheppard was fastest in Group B time-trials with a lap of 15.699 seconds to better the efforts of Scott Bloomquist, Cade Dillard, Frank Heckenast, Jr. and Chase Junghans.

Chris Madden captured the first heat race of the night by beating out Mike Marlar, Brian Shirley and Darrell Lanigan while Ricky Weiss bested Ashton Winger, Bobby Pierce and Tony Toste in the second preliminary of the evening.

Brandon Sheppard grabbed the third heat race of the night ahead of Cade Dillard, Chase Junghans and Earl Pearson, Jr. just before Scott Bloomquist earned the win in the fourth and final heat race over Rick Eckert, Jimmy Mars and Frank Heckenast, Jr.

Billy Moyer, Jr. and Stormy Scott won the two Last Chance Showdown races used to set the remainder of the starting grid for the main event.

At the start of the 30-lap feature Weiss bolted to the early lead ahead of Madden, Bloomquist, Sheppard and Marlar. Sheppard wasted no time in making a move as he took third away from Bloomquist on the second circuit.

Madden went to the lead on lap 3 as he moved around Weiss as Bloomquist and Marlar fought over the fourth a bit further back.

Weiss briefly regained the lead on lap 10 when he took the top spot away from Madden. But the Gray Court, SC driver had no intention of staying in the runner-up position. Madden sailed back into the lead on lap 11.

At the halfway point, the top-5 of Madden, Weiss, Sheppard, Bloomquist and Marlar separated from the pack and looked to settle the issue among themselves.

Sheppard moved into the second spot as he went around Weiss on lap 19. Two laps later Bloomquist followed suit and took third away from Weiss. However, Weiss took the spot back just two laps later.

Further back, Marlar and Winger exchanged fifth a couple of times with less than 10 laps remaining in the race.

But in the end, it was Madden who would cruise under the checkered flag for the victory.