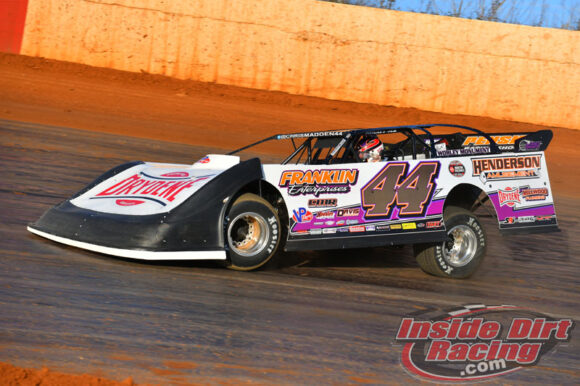 Chris Madden claimed $52,052 for his win in Georgia

The attention of much of the Dirt Late Model world was focused on the Senoia Raceway on Saturday night as that track played host to one of the biggest dirt races in the history of the state of Georgia. Some of the top drivers and teams in the sport rolled through the gates to contest the ‘Peach State Classic’ that would pay $52,052 to its victor. In the end, it was Rocket Chassis driver Chris Madden from Gray Court, South Carolina who claimed the big payday from a race shown live by FloRacing.com.

A total of 55 cars signed in for competition.

Payton Freeman earned the pole for the feature by winning the first heat race ahead of Ryan Gustin and Shane Clanton then Tyler Erb bettered Ricky Weiss and Jimmy Owens in the second preliminary.

Ashton Winger gained an outside front row starting positions by virtue of his win in the fourth heat over Spencer Hughes and Ross Bailes just before Kyle Bronson won out in the fifth heat by outrunning Tyler Millwood and Michael Page.

Chris Madden defeated Wil Herrington and Mark Whitener in the sixth and final heat of the evening.

Cade Dillard, Max Blair and Dennis Erb Jr. won the B-main races used to set the remainder of the starting grid for the main event.

Prior to the start of the feature, Friday night ‘Peach Bowl’ winner and scheduled fourth starter Kyle Bronson experienced a mechanical issue that caused his car to be pushed to the infield so that the crew could attempt repairs. The No. 40B was unable to make it out for the start of the race.

When the green flag waved over the 75-lap feature it was Winger who took the early lead with Marlar, Madden, Tyler Erb and Freeman trailing. Marlar moved to the front of the field when he passed by Winger on lap 5. Madden followed suit two laps larter when he also got by Winger to claim the runner-up spot.

Marlar and Madden ran in tight formation for several laps as they worked through slower traffic until a caution flag waved on lap 20 for Tyler Millwood slowing with a flat tire. Following that restart, Madden began to harass Marlar for the race lead while Erb challenged Winger for third.

The top-4 of Marlar, Madden, Winger and Erb tightened by lap 30 with Madden making repeated attempts for the lead. His harassment paid off on lap 32 as Madden got around Marlar for the race lead. As the pace of the race slowed with the leaders in slower traffic, the top-4 continued to run in nose-to-tail formation.

Madden was able to put a couple of those slower machines between himself and his closest pursuers by lap 45. At the same time, Winger began to apply more pressure on Marlar as they contested second. Further back, Gustin, Hughes and Weiss engaged in a fight for the final place within the top-5.

As the laps clicked through the middle stages of the race, Madden slipped away from his rivals as Marlar and Winger continued their battle for second. However, Marlar began to pick up the pace with 15 laps remaining as he closed in on Madden for the lead.

With just 8 laps to go, Marlar got tangled with the lapped car of Dennis Erb Jr. which held him up enough for Winger to grab second. On lap 73, Marlar regained the runner-up position from Winger.

But in the end, it was Chris Madden who would sail under the checkered flag to pick up the top prize.