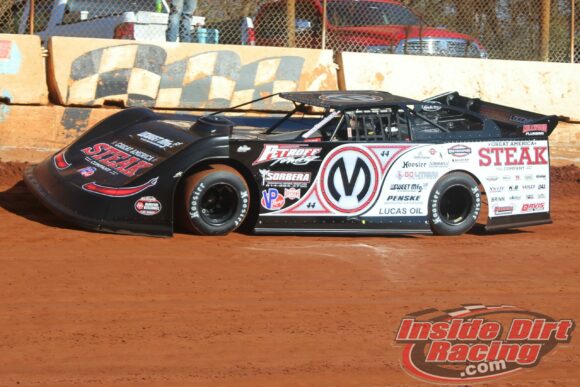 It was almost as if there were two races in one on Sunday afternoon at Cherokee Speedway. The 29th annual Blue-Gray 100 served as the season finale for the Carolina Clash Super Late Model Series while at the same time serving as the opener for the Xtreme DIRTcar Winter Series opener. At the end of the day it was Chris Madden who continued his winning ways and left the Gaffney, SC facility with the winner’s check valued at $10,000.

Ross Bailes was the fastest in Group A qualifying as he turned a lap of 14.932 seconds around the 4/10 mile clay oval to beat out Chris Ferguson, Michael Brown and Zack Mitchell.

John Henderson led the way in Group B time-trials by posting a lap in 15.035 seconds to better the efforts of Cla Knight, Brandon Overton and Jimmy Owens.

Ross Bailes and Michael Brown earned spots in the redraw by virtue of their first and second place finishes in the first heat race of the afternoon while Brian Connor and Logan Roberson also transferred to the feature from that race.

Chris Ferguson and Zack Mitchell would go to the redraw out of the second preliminary with Derrick Ramey and Dennis Franklin also moving on to the main event. Brandon Overton and Chris Madden were the redraw participants from the third heat in a race that would also send Trent Ivey and John Henderson to the big show.

Jimmy Owens and Cla Knight were the final entrants in the redraw while Corey Gordon and Brett Hamm made their way to the main event.

Tyler Bare and Jeff Smith won the two Last Chance Showdowns to determine the remainder of the starting lineup.

At the drop of the green flag for the 100-lap feature it was Mitchell who shot to the early lead ahead of Brown, Ferguson, Overton and Bailes. Owens began moving up quickly from his eighth starting spot as he took the Tommy Pope No. 22 machine to the high side and burst into the top-5 by the end of the second circuit.

At the same time, another No. 22, that of Ferguson, moved forward by charging around Brown for the runner position.

Owens continued his early march as he passed by Overton for fourth and Brown for third on laps 4 and 6 respectively.

A lap 7 restart provided Owens with another opportunity to gain positions but proved to be disastrous for Ferguson at the same time. Owens went to the high side when the green flag waved and raced side-by-side with Ferguson through turns 1 and 2. However, as the cars roared down the backstretch Ferguson’s machine snapped sideways and slammed into the inside wall causing significant damage.

Once the race went back to green Owens wrested the lead away from Mitchell then began to pull away from his closest pursuers. However, Madden had begun to make his move during a green flag run that would take the field up to lap 38.

On lap 22 the Gray Court, SC driver passed by Mitchell to take second. Four laps later the No. 0M car tracked Owens down and took the top spot on the scoreboard. From that point, it was a race for second for the rest of the field as Madden built comfortable advantages following each restart.

Throughout the middle stretches of the event the cars of Owens, Bailes, Overton, Brown and Mitchell ran in tight formation as they watched Madden continually slip away. On a lap 86 restart it was Bailes, driving the No. 9 car typically piloted by Johnny Pursley, who would make a move around Owens to seize second.

But no one would challenge Madden as he cruised under the checkered flag to capture the victory. 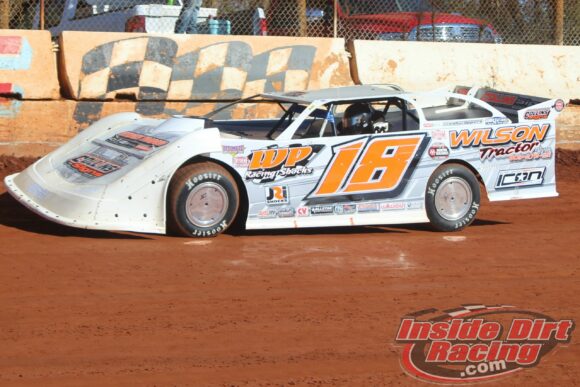