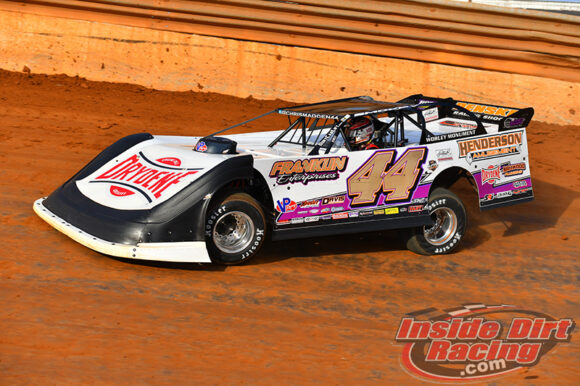 Chris Madden has been the dominate player so far in the 2022 XR Super Series feature races and that remained the case on Saturday night when the driver of the No. 44 car used a lap car as a pick to make a late race pass to get around Jonathan Davenport. The feature at the The Dirt Track at Charlotte ran caution free after Friday night’s action in the four-day Colossal 100 event had been rained out.

The Rocket Chassis driver from Gray Court, SC earned $50,000 in the race held at the 4/10 mile facility located in Concord, NC which was shown live by raceXR.com.

A total of 51 cars were signed in for competition.

Feature Re-cap: At the start of the 50-lap feature it was Davenport who jumped to the early lead with Ferguson, Madden, Hamm and Overton tracking just behind. Madden bolted by Ferguson for second on lap 3. Further back, Overton took fourth away from Hamm on the same lap.

Blair then began to move forward when he took fifth from Hamm opening the door for Strickler to also gain a position when he grabbed sixth.

Madden began to close in on Davenport on lap 9 as the driver who had already won three XR Super Series features looked to add another. The lead duo then began working through slower traffic in a race that would run caution free throughout its full distance. At the same time, Ferguson lead Overton and Blair they cut into the advantage held by Davenport and Madden.

By the halfway point, Madden closed right to the rear spoiler of the race leader and very much looked like a hunter stalking prey. With all the leaders running on the bottom side of the track, Madden made a bid to the inside of Davenport for the lead on lap 33 but the No, 49 machine held on to the top spot on the leaderboard.

As more laps clicked away, Madden continued to ride right in Davenport’s tire tracks. When Davenport found himself being held up by slower cars, Madden seized the opportunity. With four laps remaining, the No. 44 car moved to the outside of the track and sliced by both Davenport and the lapped car.

In the end, it would be Madden who would claim the win and yet another big paycheck during his lucrative 2022 season.

“It’s tough to lead in lapped traffic sometimes,” Madden said of Davenport’s circumstance. “I’ve been in that position before. We had a really good race car and me and him were having a really great race right there without lapped traffic. I’d get under him a little bit there and he’d pull me up off the corner but we could make it back up. We had a really good race car to be able to run as close to him as we did in open air and not be free.”