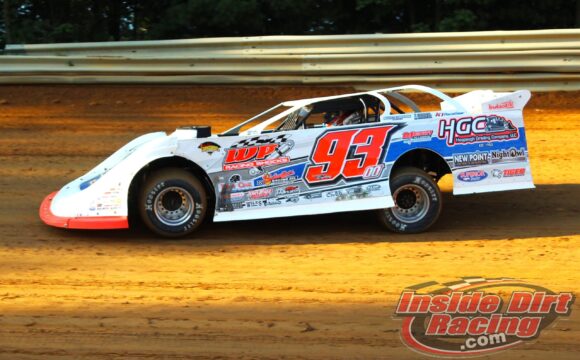 The 2022 version of the Schaeffer’s Oil Southern Nationals reached its halfway point on Thursday night with its fifth event on the schedule at Senoia Raceway. Carson Ferguson scored his first ever series win in a feature race that ran caution free.

The Longhorn Chassis driver from Lincolnton, NC earned $4,053 for his efforts on the 3/8 mile track located in Senoia, Georgia in a race aired live by FloRacing.com.

A total of 34 cars were signed in for competition

Qualifying Results: The top-5 qualifiers from each group were locked into the feature.

Feature Re-cap: Ferguson took the lead when the green flag waved over the 40-lap feature with Millwood, Roland, Nipper and Herrington in his tire tracks. Seawright looked to move forward early on as he passed by Herrignton to barge into the top-5 on the second circuit.

Soon afterwards, the low running Seawright and topside running Nipper would engage in a fight that would see them exchange the fourth and fifth positions multiple times over the next several laps.

At the front of the field, Ferguson and Millwood rain tight formation as they separated themselves from the rest of the pack as they negotiated slower traffic on lap 10. Millwood got to the inside of Ferguson to challenge for the top spot on lap 12 but the early leader was able to fend of his pursuer’s advances.

As the green flag laps continued to click off, Nipper fell back with Herrington getting around for fifth on lap 22. But ahead of the field, Ferguson began to slip away from Millwood with less than 10 laps remaining. Ultimately, it would be Ferguson who would sail under the checkered flag to earn his first Southern Nationals victory.