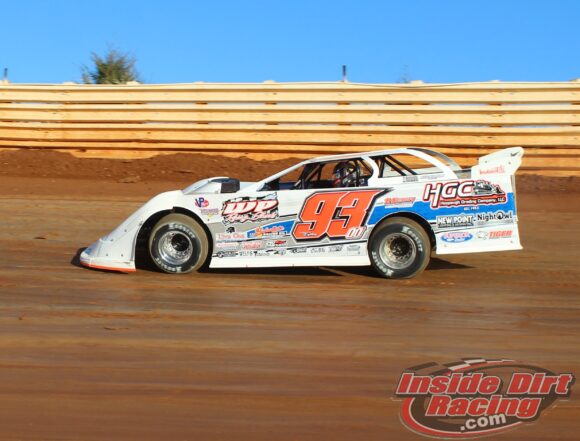 Carson Ferguson was the winner in Crossville

There were plenty of fireworks at the Crossville Speedway and not just the kind that are set off prior to the green flag. Carson Ferguson came away as the winner of the Schaeffer’s Oil Spring Nationals event but the attention of many was focused on two other drivers who had issues with each other during the middle portion of the race.

The Longhorn Chassis driver for Lincolnton, NC earned $4,053 for his efforts in a race shown live by FloRacing.com.

Feature Re-cap: At the start of the 40-lap feature it was Knuckles who took the lead with Putnam, Smith, Hedgecock and Ferguson in tow. Hedgecock and Smith engaged in a fierce battle for third during the early laps as they ran behind Knuckles and Putnam.

Disaster struck for leader Knuckles on lap 9 when he went spinning following contact with the slower car of Steve Smith. That elevated Putnam to the race lead with Smith, Hedgecock, Ferguson and Knight trailing.

Just after lap 10, Smith, Hedgecock, Ferguson and Knight closed in on Putnam to challenge for the top spot. But again, the action would slow when a yellow flag waved on lap 16 when the fifth running Knight suffered a flat tire.

After the lap 16 restart, Putnam led with Ferguson running second but the real battle was behind the leading duo. Hedgecock and Smith began trading paint as they came in contact with each other on multiple occasions with one aggressive slide job after another being thrown. Eventually, contact between the two led to a spin by Smith on the backstretch on lap 21 with several other cars either taking evasive action or making slight contact with the spinning No. 10 machine.

As the cars circulated under caution, Smith drove past several others and pulled alongside Hedgecock. After a wrestling match between the two cars, both spun with Hedgecock receiving the worst end of the deal as his left front nose piece was badly damaged. Smith pulled away from the scene as Hedgecock climbed from his ride. At that point, the angry driver made a long walk through the infield to the front stretch side where Smith had stopped to receive attention from race officials. Hedgecock was restrained and Smith eventually drove away.

Smith was placed back in the third position by Spring Nationals officials.

When the racing action resumed, Putnam held the race lead with Ferguson, Smith, Beard and Hanger rounding out the top-5. Soon after the green flag, Freeman, who had started from the rear due to a mechanical issue that had prevented him from qualifying broke into the top-5.

Ferguson soon closed in on Putnam and began to challenge for the lead as Freeman moved up another spot further back by passing Beard for fourth. Ferguson made his move onlap 30 passing Putnam for the top spot on the leader board. However, Putnam did not go quietly as he kept up constant pressure on ferguson.

In the end, however, it would be Ferguson who would claim his first career Spring Nationals triumph.