Home Uncategorized Cardwell Surprises at I-75

Cardwell Surprises at I-75 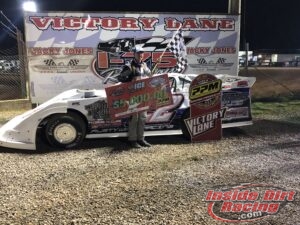 The American Crate All Stars rounded out their season opener at I-75 Raceway Saturday with night number two of the “Race Your Ice Off”. Hayden Cardwell took the 50-lap feature after a slip by Corey Hedgecock on a late race restart.

The first of two B-Main’s featured Josh Henry over Jason Welshan, William Blankenship, Bud Watson and Brody Littleton who was making his first American Crate start at only 13 years old becoming the youngest driver to start in series history.

B-Main number two saw Trey Bayne run away from the field, even after two separate incidents featuring Virgil Stevens and Cody Gentry spinning in turn one; and Stevens spinning again by himself in the middle of turns three and four.

At the drop of the green flag for the feature Corey Hedgecock stepped out with the lead followed by McCarter who started on the pole and Cook. The race was caution free for the first 34 laps, until B-main winner Trey Bayne blew up and laid oil down the front straightway and into turn one. The red flag was thrown for clean up. Blankenship, Bud Watson and Jason Cardwell had all pulled off into the infield and were done for the night due to various mechanical issues.

When the race restarted after the red flag, Hedgecock was challenged by Hayden Cardwell, McCarter, Zach Sise and Cameron Weaver. A fierce battle ensued with Hedgecock get shoved out the outside of the track down the backstretch, but was able to recover to finish second. Great three wide racing for the second and third position enabled Cardwell to sneak by Hedgecock, McCarter and Weaver to take the lead.

The final caution of the evening was brought out by Bradley Lewelling, when he slammed into the tractor tire in turn three which broke the left front suspension on his car.

From there it was all Cardwell, who pulled away from Hedgecock and Weaver over the final eight laps to take the $5,000 top prize.