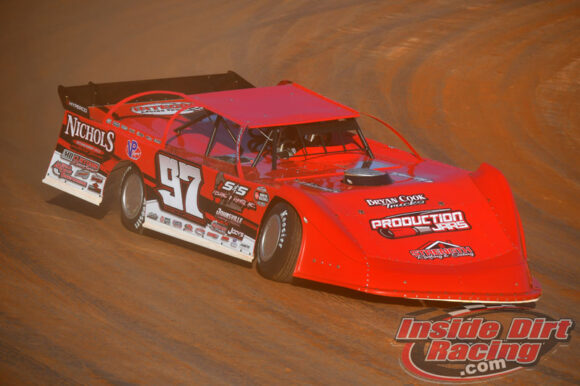 The World of Outlaws Morton Buildings Late Model Series moved to the Outagamie Speedway on Tuesday night to bridge the gap between the Prairie Dirt Classic and the USA Nationals. At the end of a crazy night of racing, it was Cade Dillard who scored the win at the Seymour, Wisconsin facility. The Robeline, Louisiana driver earned $10,000 for his efforts in a race aired live by DirtVision.com.

Brent Larson was fastest in Group A qualifying after he turned a track record lap in 13.996 seconds around the third-mile clay oval to beat out Ricky Weiss, Jimmy Mars, Max Blair and Nick Avelink.

Jimmy Mars was the victor in the first heat race of the evening as he bested Chris Madden, Brent Larson and Brett Swedberg then Ryan Gustin took the second preliminary ahead of Ricky Weiss, Max Blair and Rick Eckert.

Lukas Postl won the Last Chance Showdown race used to set the remainder of the field.

Overton jumped to the early lead when the green flag waved with Gustin, Dillard, Mars and Madden in his tire tracks. Gustin slipped by Overton to grab the race lead on lap 3. Further back, Sheppard moved around Madden for fith on lap 4 then took fourth away from Mars on lap 5.

Gustin began to pull away from the pack by lap 8 while Dillard closed in on Overton for second. The leader then began to encounter slower traffic by lap 10 as Sheppard got by Dillard for third.

Disaster struck for Gustin on lap 11 when he spun and hit the outside wall in turn four while racing among slower traffic.

On the ensuing restart, Dillard bolted into second behind Overton. Three laps later, the No. 97 went to the outside to take the lead away from the No. 76. Soon thereafter, Sheppard went to work on Overton and eventually would take second away.

On lap 18, Sheppard was keeping Dillard in his sights while Madden and Overton fought for third just behind the lead duo. But the action would be interrupted on lap 25 when a yellow flag waved for debris on the track. Shortly after the restart, Gustin came storming back as he broke into the top-5 on lap 28 and began to battle with Madden for fourth.

Dillard broke away from the pack by lap 30. Further back, Overton, Madden and Gustin engaged in the three-way tussle for positions 3-5.

But over the closing laps, Dillard would maintain control of the race as he eventually sailed unde the checkered flsg to claim his fourth career World of Outlaws Late Model Series triumph.