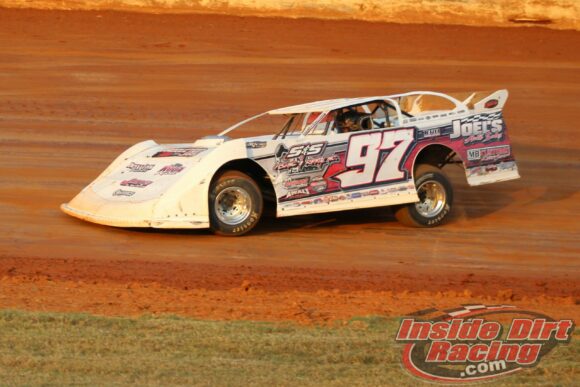 The opening weekend for the World of Outlaws Morton Buildings Late Model Series concluded on Sunday evening at Vado Speedway Park. With two races already in the books, the New Mexico track played host to a $15,000-to-win finale that saw Cade Dillard come away as the winner of the most lucrative feature of the weekend.

Dillard had collected $20,000 in the Fall Nationals event for Modifieds last year at Vado Speedway Park.

Boom Briggs led the way in Group A qualifying by posting a lap time of 15.000 seconds around the 3/8 mile clay oval to beat out Cade Dillard, Chris Madden, Frank Heckenast, Jr. and Rick Eckert.

Garrett Alberson proved to be the fastest in Group B time-trials with an effort of 15.052 seconds to beat out Dennis Erb, Jr., Billy Moyer, Jr., Brandon Sheppard and Scott Bloomquist.

Chris Madden won the first heat race of the night over Boom Briggs, Rick Eckert and Stormy Scott while Cade Dillard took the second preliminary of the evening ahead of Darrell Lanigan, Frank Heckenast, Jr. and Brent Larson.

Mike Marlar and Kody Evans won the two Last Chance Showdown races used to set the remainder of the starting grid for the feature.

At the start of the 75-lap feature it was Sheppard who went to the early lead with Moyer, Jr., Madden, Dillard and Lanigan in his tire tracks. Lanigan began a march forward on the second circuit when he got by Dillard for fourth.

A caution for Rauen’s slowing car slowed the action on lap 3. On the ensuing restart it would be Sheppard who would bolt away from the field. Meanwhile, Lanigan seized the opportunity to continue his move forward as he passed by Madden for third. That opened the door for Dillard to also passed by Friday night’s winner.

A lap 9 caution for the slowing car of Stormy Scott brought another big moment in the race as Madden’s car faltered on the restart.

On the second restart, Lanigan took second away from Moyer with Dillard moving to third. Marlar spun to bring out another yellow flag with a spin on lap 14 which provided Dillard with an opportunity to move up to second on the restart.

Billy Moyer, Jr. ended his night crashed with Bobby Pierce also finding his car propped on its side as it rested against the outside wall as part of a lap 16 incident. Ashton Winger was also collected in the mishap. All drivers involved were running in the top-10 at the time of the crash were reported to be uninjured.

Moyer and Winger fell out of the race while Pierce was able to continue.

The race went under red flag for several minutes as officials cleared the accident scene.

When the race returned to green flag conditions Sheppard shot out to a big lead while Dillard, Lanigan, Bloomquist and Weiss spent the middle sections of the feature running in tight formation for positions 2-5.

Another yellow flag waved on lap 48 when Brent Larson slowed. On the restart, Dillard went to second while Weiss moved into fourth. As the laps clicked away, Dillard began to issue a strong challenge to Sheppard while Bloomquist and Weiss exchange the fourth and fifth on a couple of occasions.

On lap 61 the two front runners exchanged slide jobs with Sheppard keeping the lead. But Dillard would not be denied.

With just nine laps remaining a caution set up the final dash for the checked flag. On the restart Dillard passed by Sheppard to assume the lead. The defending series champion threw several moves at the second year WoO Late Models driver but Dillard would go on to beat the pack to the finish line for his first win in this series.