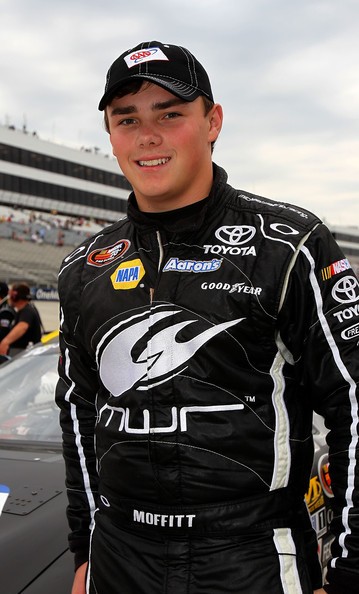 The NASCAR Camping World Truck Series will make its sixth appearance at Tony Stewart’s Eldora Speedway on Wednesday night but it will be the first visit to the half-mile dirt facility for one of the series top drivers. Brett Moffitt has won three CWTS races so far in 2018 and currently resides in the third position of the series standings. However, he will be touring the famed clay surface in Rossburg, Ohio for the first time in his racing career when he pulls his No. 16 Hattori Racing Enterprises Toyota onto the banking later this week.

But the 25-year-old driver is not without experience on dirt. As a matter of fact, the Grimes, Iowa native competed on the clay of the Midwest early in his career. Although that form of racing hasn’t been Moffitt’s primary fortay for the past several years, he has taken part in enough races that he will not feel as though he is completely out of his realm at Eldora.

“I raced IMCA Dirt Modifieds when I was 14 and I’ve done some dirt racing off and on ever since,” Moffitt pointed out in an interview with InsideDirtRacing.com. “I don’t have a ton but I do have a few years worth of dirt experience. I actually started racing go-karts when I was eleven so I was a little bit later to the game but I did that for three years. Then I moved into a Dirt Modified and raced around the state of Iowa and I’ve slowly progressed up ever since.”

While Moffitt may not be a regular Dirt Late Model or Sprint Car racer, he certainly knows the significance of Eldora Speedway and the place it holds in the racing world.

“Yeah, everyone always talks about Eldora whether it’s Modified races or Sprint Car races,” the driver explained. “It’s just a bad ass dirt race track. As a kid racing on dirt, it’s a place I always wanted to race at, although I didn’t think it would be in a truck. I think it will be fun and there’s obviously a lot of heritage there and the fans are awesome there. It’s going to be a good time.”

But at the same time, it will be a new experience and one Moffitt looks forward to.

“I’ve never raced at Eldora in anything so it’s going to be a little bit of a learning experience,” Moffitt stated. “I was able to go to a truck race there a few years ago and watch and learn. It’s always a good show, that’s for sure. Hopefully we can just keep the truck in one piece and be there at the end of the night.”

With a 150-lap “feature” serving as the main event, the Eldora Dirt Derby is a relatively short race by Camping World Truck Series standards in terms of the distance to be covered. But by dirt racing standards 150 laps comprises a lot of ground to cover. And when it is also considered that there will be numerous drivers with only limited amounts of dirt racing experience driving machines that are not really intended to be raced on dirt, there is a recipe for potential trouble in place.

“Eldora is kind of a survival race for us,” Moffitt explained. “There are a lot of guys with fast trucks who tend to take themselves out of the equation before getting halfway through the race. I think it’s all about getting comfortable and getting a decent setup under the truck and from that point on not doing anything to take ourselves out. We just want to try to be there in the top-5 or so at the end so we can get aggressive and start going after it.”

Considering that these trucks are not made specifically for racing on dirt, Moffitt believes that one does not necessarily have to have a significant background in that discipline to do well in this race. And to back that claim, the race has been won by drivers such as Darrell ‘Bubba’ Wallace and Matt Crafton who are not necessarily known for their prowess on clay surfaces, at least compared to Late Model, Modified, or Sprint Car regulars.

“I think dirt experience will help with things like getting your line right and being able to move around the track to find the grip you need, but at the same time, anyone who has raced on dirt is used to racing in cars that were meant to be raced on dirt,” Moffitt said. “Those cars have a lot of suspension travel and the rear ends work in a different way but then you hop into a 3,400 pound truck and they’re not meant to be raced on dirt so it’s more like racing a Hobby Stock on dirt than a Super Late Model.

“The weight alone is a lot and then the rear suspension and not having the four bar rear suspension that a lot of dirt cars have, with a lot of movement, the Late Models with all that rear end movement look like they’re out of control but that’s actually what they’re designed to do,” he added. “In these trucks you’re not getting any rear end movement. It’s a lot heavier and a lot less suspension to help you get that traction.”

Be it a first time visit to a dirt track or a big super speedway, Moffitt takes time to prepare himself for the experience before he ever arrives at the facility.

“Whether I’ve been to a particular track or not, I generally watch last year’s race and see how it went,” he explained. “I like to see what strategies worked and what didn’t work. Obviously, we’re going to have iRacing on the truck at Eldora and that’s a huge tool for us drivers to use. It’s the closest thing to the real thing that can give you some experience before you get there.” 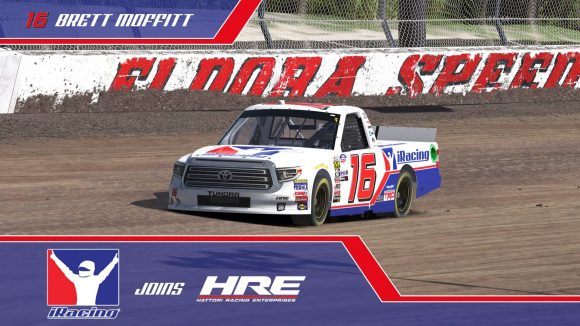 Along that same line, with NASCAR having a number of tracks on the schedules of their top divisions that are somewhat similar, Moffitt points out that drivers enjoy breaks from the norm, whether it be to a dirt track, a road course, or any other unique type venue.

“I like it because it’s a new challenge,” he said. “We’re all competitors and any time you present us with a new challenge it seems like the good guys tend to rise to the top. I have yet to do dirt in a truck, but I’m looking forward to it. And I love going to the road courses because it’s a lot of fun shifting and turning left and right. I like embracing a new challenges and it’s just fun for me.”

But this young and talented driver who has scored wins on the mile-and-a-half tracks in Atlanta and Chicago as well as the short track in Iowa so far this year claims that he does not have a particular favorite when it comes to the style of track. It’s just being competitive that matters most.

“Our mile-and-a-half program has been really strong this year,” Moffitt declared. “Up until this past weekend at Kentucky, we’ve been a truck that has a chance to win everywhere we go. But at Iowa and Gateway we really stepped up our short-track program and we were really strong at those races too. At Gateway we really didn’t get the result we deserved but we had a strong truck and passed the most trucks of anyone there. We really don’t have a weakness at this point. I don’t really have a favorite, I just like running well and competing for wins. My team is giving me great trucks to drive and that makes my job easier and a lot more fun.”