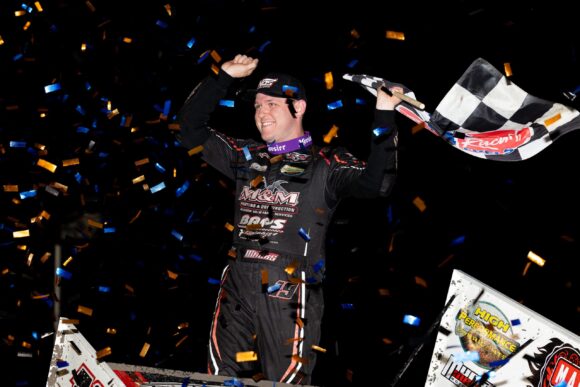 The former-Outlaw collected the $20,000 payday in the DuraMAX Drydene Texas Outlaw Nationals

MESQUITE, TX – April 2, 2022 – There was no comfort for Brent Marks while leading at Devil’s Bowl Speedway Saturday night. Even with more than a second lead.

He knew being at the track that birthed the World of Outlaws NOS Energy Drink Sprint Car Series, with its 10-time champion behind him, there was no room for error. Only his wit and lightning-quick #19 could help him secure the big-money victory in front of a packed house.

Marks, of Myerstown, PA, bested the stout field in the annual return to the Texas facility for the DuraMAX Drydene Texas Outlaw Nationals, collecting the $20,000 check and his eighth career Series win.

“You [Chase Raudman] said I had a big lead, but it sure didn’t feel like it,” Marks said in Victory Lane. “I felt pressure the whole time, just the way the track was. It was so fast and muddy. I was getting tight behind lap cars… Just muscled it there at the end and tried not to make any mistakes.”

Track speeds were quick all night, making for an exciting watch as Marks flew through lapped traffic after grabbing the lead from Brian Brown on a Lap 3 restart. Starting outside front row, Marks originally had a different plan to get around Brown. But after a great run into the first corner a lap after the restart, he couldn’t help but seize the opportunity with a slide job in Turns 3-4.

“My plan was just to wait until we got to lapped traffic and hope that he’d make a mistake, that way I could try and get by him,” Marks said. “We just had a better car than he did there at the beginning.”

Now with the lead and a clear track in front of him, Marks hit the hyper drive, opening an advantage over Brown that grew every lap. At its height, Marks had amassed a near six-second lead in traffic as the rest of the field struggled to get by the cars Marks spent little time on.

“I thought I’d just settle down in lapped traffic and see what happens,” Brown said of his plan after Marks got by him. “We got to lapped cars and Brent blew through four or five, and the next thing you know they’re running two-three-wide and I could never clear any.”

However, from Marks’ point-of-view inside his M&M Painting & Construction #19, it was a bit more difficult than he made it look.

“Guys in front of me were tight, and they just didn’t know which direction they wanted to go, so picking a line was really hard too.”

Just past halfway, Donny Schatz moved to the top and powered by Brown for second at the exit of Turn 4. Then, he turned his attention to trying to run down Marks.

“I was super tight, so getting out around somebody was kinda sketchy,” Schatz said. “Brown kept slowing down more and more, so I kinda had no choice but to just go and hope that I didn’t get too balled-up and someone goes by on the bottom.”

Though Marks was still over five seconds ahead, Schatz cracked the whip and made some headway, chopping the gap down to just more than three seconds in the final five laps. Ultimately, he came up a bit short, but bagged a runner-up for his best finish since the season-opening win at Volusia Speedway Park in February.

“Brent was so far out there, it was hard to get caught back up,” Schatz said. “We obviously didn’t have any yellows, so it might’ve been a different story if we had a yellow. But that’s the way it goes.”

Brown crossed the stripe third for his first podium finish against the World of Outlaws this season.

Three-time and defending race winner Logan Schuchart looked to be in contention for a shot at a four-peat early on in the program, qualifying inside the top-10, but engine issues in his Heat Race forced him to come through the Micro-Lite Last Chance Showdown. Starting 21st, he was only able to get to 16th, but picked up the KSE Hard Charger honors.

The World of Outlaws NOS Energy Drink Sprint Car Series next heads to the Show-Me State of Missouri for a pair of races at US 36 Raceway and Lake Ozark Speedway, Friday-Saturday, April 8-9. For tickets, CLICK HERE.

If you can’t make it to the track, you can watch all the action live on DIRTVision – either online or by downloading the DIRTVision App.