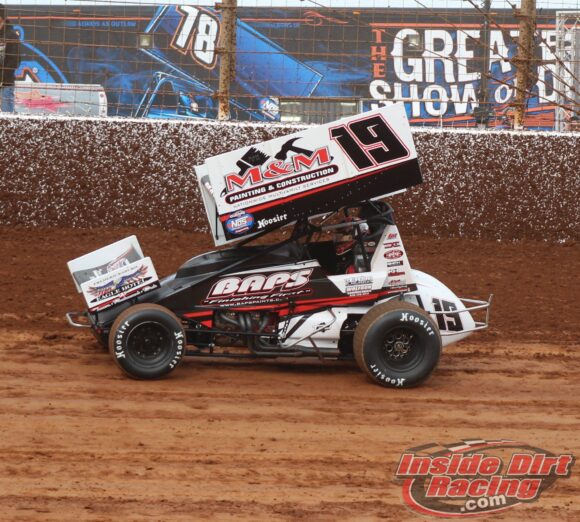 Brent Marks took the lead when Logan Schuchart had trouble

There was heartbreak for Logan Schuchart, glory for Brent Marks, long-awaited success for Brock Zearfoss, a mind-blowing run for Donny Schatz, and the culmination of a championship for Brad Sweet.

In the end, it was Myerstown, PA’s Brent Marks standing on the World Finals stage in only his third outing with his new operation, Murray-Marks Motorsports. While it’s the ending to 2021 for The Greatest Show on Dirt, it’s only the beginning to Marks’ newest chapter.

The Myerstown Missile was handed the lead on Lap 21 of 25, as for the second night in a row, Logan Schuchart fell victim to terribly bad luck. The Shark Racing, Drydene Performance Products driver dominated the entirety of the Feature until the right rear wheel let go and sent him into the fence with four laps left.

For Marks, the victory marked his first-ever win at The Dirt Track at Charlotte. He’s at seven-career World of Outlaws wins with three of them coming in 2021.

“It was the right place at the right time, for sure,” Marks mentioned. “Honestly, we’re a 14th-15th here, but we’ve been working hard all year long to get better everywhere and it’s paying off. I can’t say enough about this whole team. From Allen Murray and his family to all of our partners, we have so many amazing backers. The future is looking good.

Although the former full-timer won’t return to platinum status in 2022 with the Series, his victory and recent success could be an ode to an eventual reunion with The Greatest Show on Dirt.

“I miss being on the Outlaw tour, but we’re starting fresh here and trying to build a good program so when we do come back, we’re ready for it,” Marks added.”

Behind Brent, his cousin Brock Zearfoss finished a season-high second-place with a spectacular run aboard the Moose’s LZ Bar & Grill #3Z. It marked the culmination of a grinding season for The Jonestown Jet, who was in position for wins, podiums, and top-fives throughout the year, but bad luck hounded the team. In the 80th and final race of the year, he found redemption for himself.

“Better late than never,” Zearfoss said with a grin. “We had the opportunity to win several races, but so many things kept us behind that little bit. The people behind me have brought me up when I’m down. I keep saying it, but we really have been getting better since Knoxville. We were battling for the win and I got too antsy I think. Just having the opportunity to win is special for us.”

Rounding out the podium was Donny Schatz with a wild 25th-to-3rd bid, the longest KSE Hard Charger performance of the season. It’s a momentum-building moment for the 10-time champion, who expects to return to title contention in 2022 with Tony Stewart/Curb-Agajanian Racing.

“That’s what is expected of me,” Schatz said. “We found ourselves in every bad position and we just didn’t change enough stuff. We finally did and we changed everything except the seat, steering wheel, and driver. I’m glad we got a respectable finish to end the year.”

UP NEXT: The World of Outlaws NOS Energy Drink Sprint Car Series enjoys a short three-month off-season before firing off a 90+ race grind in 2022 with the DIRTcar Nationals at Volusia (FL) Speedway Park on February 10-12. Get your TICKETS HERE.