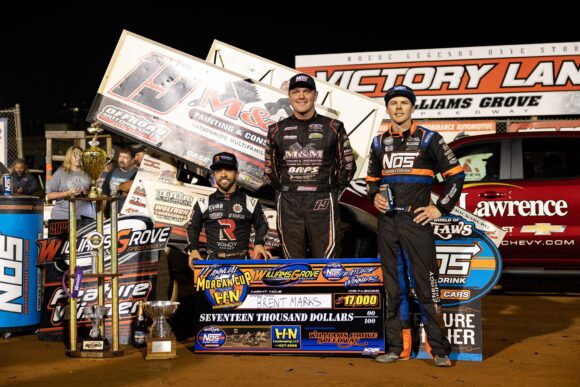 MECHANICSBURG, PA – May 14, 2022 – One yellow flag is what changed it all in Saturday’s Morgan Cup finale at Williams Grove Speedway.

Hanover’s Jacob Allen was poised to complete a storybook week, sweeping a swing through his home state of Pennsylvania with first-career wins at Lincoln Speedway and now Williams Grove. It was the perfect ending to a perfect week in Posse-land, but then the Shark Racing #1A started sputtering as the Newman Racing Engines powerplant starved for fuel with only two to go.

Allen had controlled the first 28 laps of the 30 lapper and was pursuing a perfect night with a QuickTime, Heat win, and Dash victory when disaster struck as the caution flew moments prior to the white flag waving. It was at that moment that Allen knew he had no shot of hanging on.

“I knew immediately when the caution flew that I wasn’t gonna make it,” Allen told DIRTVision afterward. “I feel like if we stayed green that I could’ve limped it home, but I still don’t know if I could’ve survived for the win. It’s just the name of the game. We’ll come back next time with a different strategy and we won’t run out.”

While Allen went from hero to zero, behind him in the right place at the right time was fellow Pennsylvanian, Brent Marks.

The Myerstown Missile, in fuel conservation mode himself, fought off a bad vibration and non-existent brakes to seize control of the lead with the white flag waving. He survived the final mile with ease and took the Murray-Marks Motorsports #19 to victory lane with $17,500 and the Morgan Cup trophy awaiting him.

Although he’s Pennsylvania’s “truest Outlaw,” Marks’ victory goes on the scoreboard for the Posse with the rivalry tied at 1-1 with another seven races scheduled this year in The Keystone State. Saturday marked his ninth career win with the World of Outlaws NOS Energy Drink Sprint Car Series and the 14th of his career at Williams Grove Speedway.

“It’s great to win any of these World of Outlaws races, but these higher-paying ones feel even better,” Marks said. “There’s no doubt we got extremely lucky, but we had to be in that position to get it done. I can’t thank my guys Fud [Dennis Christ] and Heath [Moyle] enough. We destroyed a car on Wednesday, built this thing on Thursday, and here we are in victory lane.”

Following an hour-long rain delay, racing resumed at 11:00 pm on Saturday with air density, fueling, and weight becoming crucial factors in the program. While Allen ultimately ran out, it was on the mind of Marks as well and may have won him the race.

“I tried to save as much as I could under yellows by staying totally off the throttle and leaning the engine out as much as possible,” Marks noted on his fuel conservation. “I was running out near the end of the Dash and with how fast the pace was tonight I knew we should be worried. The track turned out to be pretty sporty after the rainstorm, and we did just enough to make it all the way.”

For Marks, he now owns wins from each of the three World of Outlaws trips to Williams Grove – Morgan Cup in May, Summer Nationals in July, and National Open in October.

For Allen, he barely missed out on earning back-to-back wins for the first time in his career, which would’ve given him three World of Outlaws victories in the last six weeks.

“Sometimes the cards just don’t fall your way,” Allen added.” It’s life, though, it goes on. I’m proud of myself and I’m proud of this team. I’m thrilled with how fast we are lately. Being competitive nightly with the World of Outlaws is such a surreal feeling.”

The drama didn’t end with Allen’s fuel light as Carson Macedo crossed the finish line in second place, but failed to meet the post-race minimum weight requirement and thus was disqualified. The wild turn of events took the Jason Johnson Racing #41 from taking over the championship lead to being back down to third and behind by -42 points.

Assuming the runner-up result by default was Sheldon Haudenshild aboard the NOS Energy Drink, Stenhouse Jr. Marshall Racing #17. He was joined on the podium for the first time in 2022 by third-place finisher Rico Abreu, continuing to show speed since welcoming renowned Crew Chief Ricky Warner to the #24 team.

Rounding out the top-10 at Williams Grove was Donny Schatz in fourth, Logan Schuchart in fifth, David Gravel in sixth, Brad Sweet in seventh, Spencer Bayston in eighth, James McFadden in ninth, and Giovanni Scelzi in tenth.

UP NEXT (Fri-Sat) – The World of Outlaws NOS Energy Drink Sprint Car Series will head to New Jersey and Ohio next week. Three races in five nights will take the Series to Bridgeport Motorsports Park on Tuesday. May 17, then Attica Raceway Park on Friday, May 20, and finally Sharon Speedway on Saturday, May 21. Fans can BUY TICKETS HERE, or watch every lap LIVE on DIRTVision.

James McFadden living out his dream with the World of Outlaws