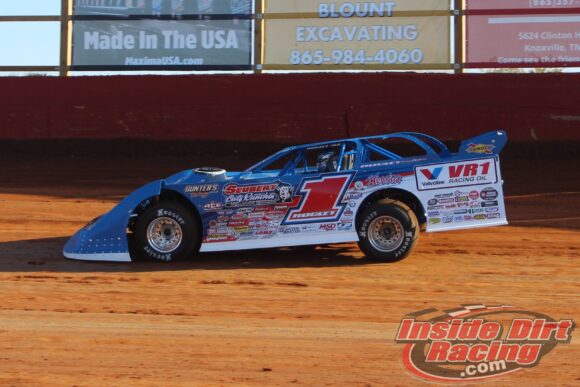 The World of Outlaws Morton Buildings Late Model Series roared into the Cherokee Speedway on Friday night to contest a pair of feature races in the Rock Gault Memorial that would serve as a prelude to Saturday night’s big show. At the end of the night in the second race of the twin bill, it was Brandon Sheppard who took the checkered flag at the Gaffney, SC facility to score his first feature win of the season. The New Berlin, IL driver earned $5,000 for his triumph in a race that was shown live by DirtVision.com.

Scott Bloomquist posted the fastest time to lead qualifying for the B Feature with a lap of 14.900 seconds around the 4/10 mile clay oval besting Brandon Overton, Brandon Sheppard, Shane Clanton and Michael Brown.

A total of 43 cars were entered into both features on Friday night.

When the 25-lap feature took the green flag it was McDowell who jetted to the early lead with Bloomquist, Clanton, Smith and Sheppard in arrears. Sheppard quickly went on the move as he passed by Smith to stake claim to the fourth position on the second lap. Then at lap 5, the No. 1 Rocket Chassis house car again moved forward by taking third away from Clanton.

The fourth running machine of Clanton slowed on lap 8 to bring out the only yellow flag of this second feature race. On that restart, Sheppard climbed to the second spot while Overton came up to fourth.

Beginning at lap 10, Overton and Bloomquist engaged in an intense battle for the third spot while McDowell appeared to be in control. Overton would eventually take third away from Bloomquist on lap 15. However, Sheppard began to cut into the No. 17m car’s advantage as the laps clicked away.

Finally, Sheppard made an outside move out of turn four as the lead duo received the signal of two laps remaining. Sheppard carried the momentum from that high line into the newly reconfigured turns one and two of Cherokee Speedway and claimed the top spot.

From there, the No. 1 car sped to the finish line to take the win.