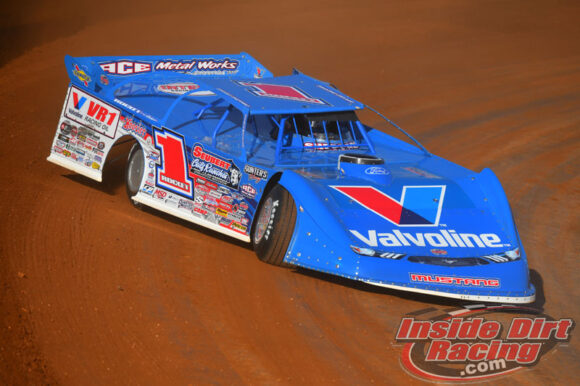 After a layoff of just over three months, the Castrol FloRacing Night in America returned to action on Monday night at the popular Fairbury Speedway. The ‘One for the Road’ event had originally been slated for Tuesday night but was moved up by a day due to the possibility for rain on the original date. At the end of a quick night of racing, it was home state hero Brandon Sheppard who scored the win at the Illinois facility. The Rocket Chassis driver from New Berlin, Illinois earned $15,000 for his efforts in a race shown live by FloRacing.com.

Dennis Erb Jr. and Mike Marlar advanced to the main event out of the lone B-main.

At the start of the 50-lap feature it was Clanton who went to the lead with Larson, Sheppard, Alberson and Babb in his tire tracks. A caution just after the completion of the first lap involving several cars near the rear including Pierce, Ledford and Brigg slowed the action.

Babb spun from fifth place in turn three after the lap 1 restart with Tyler Erb and Heckenast being collected.

On the restart, Alberson moved up to third while Wenger took fifth. But on lap 7, Sheppard moved back around Alberson for third. Further ahead, Larson took the lead away from Clanton on lap 8.

Alberson took second away from Clanton on lap 9. He then pulled up to challenge Larson for the top spot. On lap 13, Alberson moved around the NASCAR star to grab the lead as those two cars began to catch the tail of the field. Wenger began to fight with Sheppard for third just before his car went up in smoke to bring out a yellow flag on lap 20.

Under the caution period, Larson came to the pit area with a flat right rear tire. On the lap 20 restart, Sheppard bolted to the lead while Davenport moved to fourth after starting near the rear of the field.

A lap 27 caution for debris slowed the frantic pace. The order at that time was Sheppard, Gordy Gundaker, Alberson, English and Davenport but Alberson came to the pit area for a new right rear tire.

On the lap 27 restart, English made his way to second then charged ahead to fight with Sheppard for the race lead. But Sheppard would pull away as the laps clicked off. English then fell back into a fierce fight for the runner-up position with Spatola and Gordy Gundaker.

Further back, Davenport and Pierce battled for fifth with Larson quickly coming back to eventually joined that fray. But over the closing laps, it was Sheppard who would sail under the checkered flag to claim the victory.

The win extended Sheppard’s streak of winning at least one feature per year at Fairbury to five.

Please consider also reading – Jonathan Davenport: “I’m going to drive by him and that’s what we did“