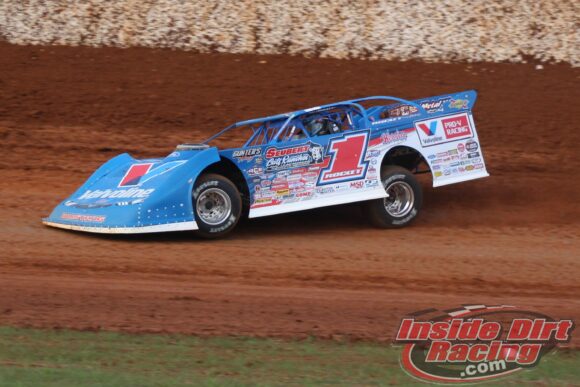 The World of Outlaws Morton Buildings Late Model Series took to the track at Davenport Speedway for a midweek show on Tuesday evening. Brandon Sheppard emerged from a fierce battle to end the night in Iowa as the race winner. The New Berlin, IL driver earned $10,000 for his efforts in a race shown live by DirtVision.com.

Jimmy Owens was fastest in Group A qualifying and overall as he established a new track record by touring the quarter-mile clay oval in 13.979 seconds. That lap beat out the efforts of Chad Simpson, Chris Simpson, Chase Junghans and Rich Bell.

Jimmy Owens was the victor in the first heat of the night over Chris Simpson, Rich Bell and Dave Eckrich while Chad Simpson took the second preliminary ahead of Chase Junghans, Bobby Pierce and Garrett Alberson.

Brandon Sheppard scored the win in the third heat over Darrell Lanigan, Ricky Weiss and Scott Bloomquist just before Cade Dillard was victorious in the fourth and final heat by outrunning Ashton Winger, Jimmy Mars and Dennis Erb Jr.

At the start of the 50-lap feature it was Chad Simpson who grabbed the early lead ahead of Dillard, Sheppard, Chris Simpson and Owens. On lap 4 it was Owens who went on the move by passing Chris Simpson for fourth as the top-3 of Chad Simpson, Dillard and Sheppard ran in tight formation.

Dillard moved the lead by passing Chad Simpson on the sixth circuit. He was followed by Sheppard who passed the fading Simpson for third on lap 8. Owens then drop kicked Simpson back to fourth on lap 9.

Dillard’s leading machine caught the tail of the field on lap 13. Just behind, the cars of Sheppard and Owens were busy exchanging second before Sheppard secured the spot by lap 15.

Further back, the No. 18 of Junghans was climbing through the field as he broke into the top-5 on lap lap 16 then moved to fourth on lap 21.

But at the front of the field Sheppard swept by Dillard to capture the lead of the race on lap 19.

Bloomquist brought out the first caution of the night on lap 24 with a flat tire.

On the restart, the track featured two very distinct with some far up top and other right down on the bottom. Top running Owens took second away from bottom running Dillard on lap 26 but that battle would continue for several laps just behind leader Sheppard.

Meanwhile, fourth running Mars closed in on the leading trio and looked to take advantage of any slip.

Dillard found himself stuck behind a slower car with eight laps to go which allowed  Sheppard and Owens to claw back into the fight for the lead. Sheppard finally slipped ahead on lap 48 then just edged his two closest competitors to the checkered flag to claim his eleventh WoO Late Models win of 2020.