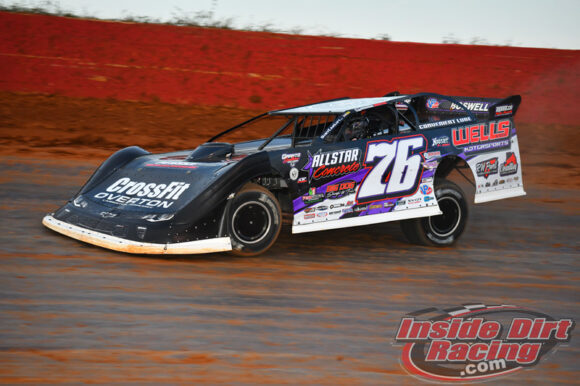 Yet another Eldora win for Brandon Overton

Brandon Overton was the big winner at Eldora Speedway in 2021 but failed to make the starting lineup for the Eldora Million on Thursday. That run of misfortune changed on Saturday afternoon when he claimed the rain-delayed B Group Feature leading into the Dirt Late Model Dream after assuming the lead on a late race restart.

The Longhorn Chassis driver from Evans, Georgia earned $12,000 for his win in a race held on the half-mile clay oval located in Rossburg, Ohio and shown live by FloRacing.com.

Points acquired during all of the day’s activities would play an important role in setting the heat race lineups for the Dirt Late Model Dream.

The top-16 would be inverted for the purpose of setting heat race lineups.

Feature Re-cap: At the start of the 25-lap feature it was Strickler who took the early lead with Overton and Moran side-by-side for second followed by Rice and Marlar. Moran asserted himself as the second-place runner by the third circuit.

Moran closed in on Strickler and began to challenge for the lead. Those two cars came in contact with each other on lap 10, almost spinning off of turn two, before Moran took control. Overton also passed by Strickler to take the runner-up spot. The No. 76 then closed in and began to harass the No. 9 for the race lead as those two fought in traffic.

Early leader Strickler began to fade with 10 laps remaining as Thornton and Marlar drove by for fourth and fifth. But Marlar’s good fortune proved to be fleeting as he found himself squeezed as he and Strickler raced in traffic causing him to tangle with the lapped car of Linville causing significant damage to both machines.

On the lap 18 restart, Overton jumped to the lead and then sailed on to victory.