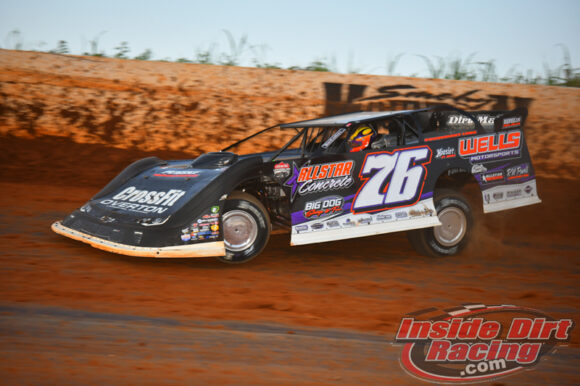 Brandon Overton got the win in Charlotte

The World of Outlaws Morton Buildings Late Model Series pulled into the Dirt Track at Charlotte on Wednesday night to begin its final two-race run known as the Last Call of the 2020 season. After a powerful performance, it was Brandon Overton who came away with the feature win at the facility located in the shadow of the Charlotte Motor Speedway. The Evans, GA driver earned $12,000 for his efforts.

Kyle Larson led the way in Group A qualifying and overall with a lap of 14.305 seconds around the 4/10 mile clay oval to beat out Dale McDowell, Daulton Wilson, Tim McCreadie, Ryan King, Chris Ferguson, Ross Bailes and Dennis Erb Jr.

Tim McCreadie was the winner of the first heat race of the evening ahead of Ross Bailes and Kyle Larson while Dale McDowell took the second preliminary over Dennis Erb Jr. and Ryan King.

It was Chris Ferguson who took the checkered to claim the third heat to beat out Daulton Wilson and Jimmy Owens then Josh Richards won the fourth heat by outperforming Brandon Overton and Chris Madden.

Kyle Strickler finished first in the fifth preliminary outrunning Donny Schatz and Jonathan Davenport just before Brandon Sheppard earned the win in the sixth and final heat ahead of Chase Junghans and Parker Martin.

Tyler Millwood, Ricky Weiss and Cade Dillard were the winners of the three Last Chance Showdown races used to set the remainder of the starting grid.

The WoO Late Models redraw placed McCreadie on the pole with Strickler, Sheppard, Ferguson, McDowell and Richards lined up in order.

At the start of the 50-lap feature it was Strickler who took the early lead ahead of McCreadie, Richards, Ferguson and Overton. Just behind the top-5, Sheppard and McDowell fought over the sixth spot as Strickler began to pull away from the pack.

Overton began to move forward on lap 7 when he passed by Ferguson to grab fourth as the race leader worked through slower traffic. On lap 10, Ferguson, Sheppard and McDowell waged war for the fifth position. Sheppard would eventually move to fifth on lap 12 by passing Ferguson.

Overton’s charge continued as he moved around Richards for third on lap 13. He then took second away from McCreadie on the 14th circuit. Overton got around Strickler to stake claim to the lead on lap 18.

The first caution flag of the night waved on lap 22 when early leader Strickler slowed. On the ensuing restart, McCreadie established himself as the second place runner behind Overton.

Davenport slowed to bring out a second yellow flag when he slowed on lap 24. On that restart, Erb and McCreadie fought over second as Schatz made his way into the top-5 just before yet another caution occurred when Madden slowed with a flat tire.

Overton continued to lead while McCreadie again engaged in a battle for the runner-up spot on laps 29 and 30 just as Richards stopped on track to bring out another yellow flag on lap 34. On the restart, Erb took second with Schatz and McCreadie engaged in a fight for third just behind.

McDowell and Schatz exchanged the fourth spot twice on lap 36 and 37 while Sheppard, who changed tires under an earlier caution, quickly rose through the field. But it was Overton who would build a lead of a full straightaway lead as he eventually sailed under the checkered flag to collect the victory.