Brandon Overton picks up $10,000 on Friday night at Screven 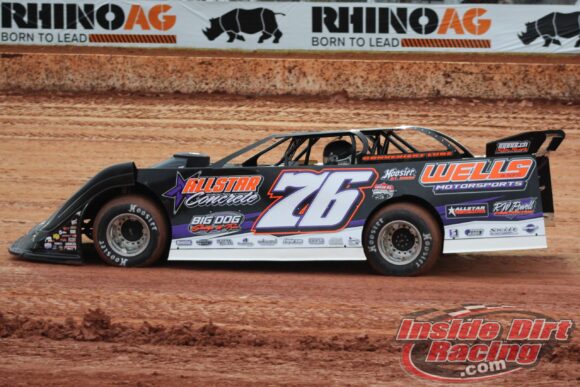 Brandon Overton led all the way to score the win

Screven Motor Speedway played host to the first of its two nights of Georgia-Florida Speedweeks on Friday night with an unsanctioned $10,010-to-win feature. At the end of the night at the Sylvania, GA track it was Brandon Overton who left his home track with the winner’s trophy and the big check.

Ross Bailes set the fast time in Group A time-trials with a lap of 14.712 seconds to top Kyle Hardy, Chris Ferguson, Jason Covert and Dale McDowell.

Brandon Overton was quickest in Group B qualifying when he turned a lap in 14.736 seconds to beat out Trent Ivey, Jimmy Sharpe, Darrell Lanigan and Gregg Satterlee.

At the start of the 50-lap main event it was Overton who would take the early lead ahead of Bailes, Ferguson, Lanigan and Covert. Covert made a move on Lanigan at lap 2 with contact between the two causing a flat tire on the No. 29 car and bringing out a caution.

Hardy made a big move on the ensuing restart to make his way up to the third position. However, the No. 79 car would spin in turns one and two on lap 3 to bring out another caution.

By lap 5 Overton slipped away from a tight battle between Bailes, Ferguson, Covert and Ivey for positions 2-5. The action was again slowed when a yellow flag waved on lap 8.

Satterlee passed Ivey to take fifth on lap 9 as Overton again pulled away from the field. The No. 76 then encountered slower traffic on lap 13 but was unfazed as he passed by those machines. At the same time, Ferguson moved in to challenge Bailes for the runner-up spot but the No. 58 held the spot.

A lap 17 restart spelled disaster for Ahanna Parkhurst and Lanigan as those two cars were part of a tangle that ended with the No. 23 and No. 29 stacked one on top of the other.

When the race returned to green flag conditions Overton again began to pull away as Ferguson moved around Bailes to claim the runner-up spot. Just behind the leaders Bailes, Covert, Satterlee and Ivey engaged in a fierce battle for positions inside the top-5. That battle was highlighted by a near spin by Ivey as he looked inside of Satterlee.

Ferguson closed in on overton as those two drivers worked through slower traffic at the halfway point of the feature.

However, a lap 32 caution slowed the pace for the final time of the evening. Following the restart, Overton pulled away from the pack as Bailes took second away from Ferguson, who had earlier suffered damage to his rear spoiler.

Overton would be unchallenged over the closing laps as he claimed the win for the Wells Motorsports team.