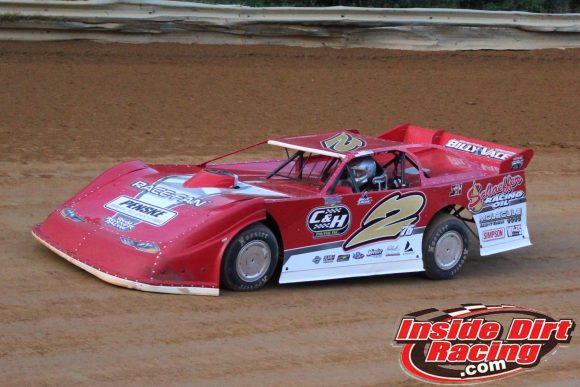 Brandon Overton kicked off the 2019 Southern Nationals with a win

The Schaeffer’s Oil Southern Nationals opened its 15th annual mini-series on Saturday at Wythe Raceway. At the end of the night it was Brandon Overton and his Rum Runner Racing team who turned in a dominating performance by leading every lap of the feature before leaving the Rural Retreat, VA track with the first victory in SoNats competition for 2019 and with a check valued at $10,000.

Michael Brown set the pace in Group A qualifying and overall with a lap of 16.445 seconds around the big clay oval to beat out Ross Bailes, Dennis Franklin and Brandon Knizer.

Dale McDowell set the pace in Group B time-trials with a time of 16.593 seconds to better the efforts of Kyle Strickler, Brandon Overton and Kyle Hardy.

Michael Brown earned the pole for the feature by winning the first heat race of the night by finishing ahead of Dennis Franklin, Donald McIntosh and Daulton Wilson while Ross Bailes bested Brandon Kinzer, Aaron Ridley and Tanner English.

Brandon Overton would start the main event from the outside of the front row by virtue of his win in the third heat of the evening over Dale McDowell, Corey Gordon and Tyler Clem just before Vic Hill used a last lap pass to beat out Kyle Hardy, Michael Page and Kyle Strickler.

At the start of the 53-lap feature it was Overton who quickly bolted to the early lead with Brown, Hill, McDowell and Bailes trailing. The front runner wasted no time in building up a big advantage over his pursuers while McDowell moved in to challenge Hill for third in the early going.

Overton began to encounter slower traffic as early as lap 8 while Hardy, Franklin and Page engaged in a tight battle for positions 6-8.

On lap 11 McDowell was able to move around Hill for third as Overton continued to pull away.

A lap 15 yellow flag for the slowing car of Christian Hanger gave the field an opportunity to catch up with Overton. However, one important player was not so lucky as the second running car of Brown pulled into the pit area under the cation and retired from the race.

The ensuing restart saw Overton again jump out to the lead with McDowell now following. Strickler and McIntosh were able to take advantage of a bobble by Hill and move up to third and fourth respectively. Bailes in the meantime began to fade as his No. 87 dropped back through the top-10.

After only four laps since returning to green flag conditions Overton had built his lead to a full straightaway over McDowell while Strickler, McIntosh and Page ran in close formation as they contested positions 3-5. However, the night would soon come to a sour ending for Strickler as his car dropped off the pace and out of the race on lap 31.

Overton began lapping up into the top-10 until a caution slowed his pace on lap 38. Under this yellow, Bailes withdrew from the race and the fourth-running McIntosh came to the hot pit area to change a flat tire.

Shortly after the field went back to full speed Page spun while racing underneath Hardy for third. The No. 18x car tagged the outside guardrail in turn two leaving Hill with no place to go and getting collected.

The red flag was displayed for several minutes while crew worked to repair the guardrail.

When the racing resumed Overton once more drove away from the pack and ultimately to the checkered fag.