Brandon Overton fights off challenge for $20,000 win at Screven 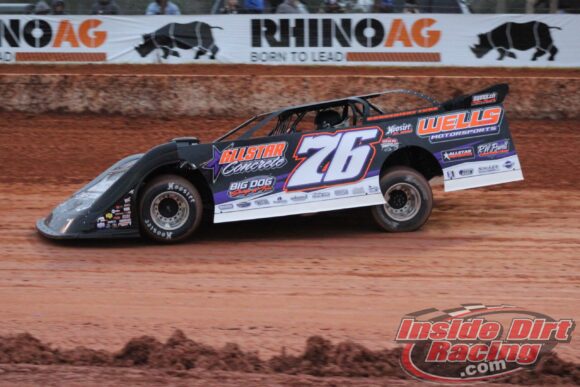 Brandon Overton held off Ross Bailes for the big win

Drivers and teams rolled through the gates of the Screven Motor Speedway on Saturday for the second of the two days that make up the 2020 version of the Winter Freeze. At the end of the night it was Brandon Overton who left the Sylvania, GA track with a winner’s check valued at $20,010. That coming after he took home the $10,010 first prize on Friday evening.

Fast time honors in Group B time-trials and overall went to John Henderson who posted a time of 14.638 seconds to better the efforts of Dale McDowell, Jason Covert, Trent Ivey, Gregg Satterlee and Michael Page.

However, Ivey’s car was badly damaged when he suffered a roll over crash on his second qualifying lap. He was reported to be uninjured.

It was Brandon Overton who earned the pole starting position for the feature by winning the first heat race of the night as he beat out Ross Bailes, Coleby Frye and Brent Dixon while Casey Roberts topped Chris Ferguson, Cla Knight and Tyler Millwood to score the win in the second preliminary.

At the start of the 60-lap feature it was Overton who bolted to the early lead with Covert, McDowell, Bailes and Roberts trailing. After just three laps the Friday night winner, Overton, began pulling away.

Bailes, in his first weekend as the new driver for Big Frog Motorsports, proved to be the race’s hard charger as he began working on McDowell in an attempt to take third on lap 4. Those two drivers battled lap after lap until Bailes finally emerged with the position on lap 15.

Overton continued to control the race. However, slower traffic would play a factor in a feature that did not see a caution flag until less than 10 laps remaining.

Bailes continued his charge on lap 17 when he took the runner-up spot away from Covert. At that point the No. 58 car began his pursuit of the race leader. With Overton mired in slower traffic, Bailes closed in at lap 30.

Both drivers maneuvered through slower cars with Bailes closing then losing ground depending on how each machine caught those being lapped.

On lap 49, Bailes closed in and made a move to the outside that resulted in a pass of the race leader. But a caution flag waved before the lap could be completed and Overton was placed back at the front of the field.

When the race returned to green flag conditions, Overton was able to break away with clear track in front of him. At the same time, Page began an assault through the top-5 passing Roberts for fifth then getting around McDowell for fourth and finally Covert for third.

But Overton sailed under the checkered flag to earn the lucrative win on what he considers to be his home track.