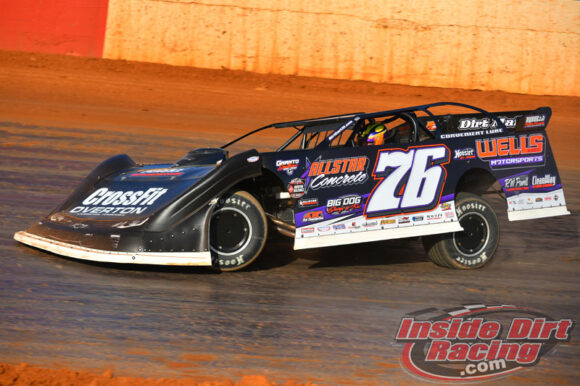 After a pandemic-related cancellation in 2020, the Dirt Late Model Dream returned to Eldora Speedway for twin events this week. The first of those two lucrative races was contested at the historic facility on Thursday night. When all was said and done, including a rain delay that interrupted the action in the midst of heat races, it was Brandon Overton who came away from the Rossburg, OH track as a crown jewel winner for the second time in his career(2020 USA Nationals). The Evans, GA driver earned a whopping $127,000 for his efforts.

The starting order for the heat races was determined by the preliminary action held at ‘The Big E’ on Wednesday night.

Kyle Larson was the winner of the first heat race of the night beating Ricky Thornton Jr and Jonathan Davenport to the finish line while Jacob Hawkins took the second preliminary over Jimmy Owens and Josh Richards.

It was Brandon Overton who took the checkered flag ahead of Dale McDowell and Zack Dohm in the third heat then Kyle Bronson grabbed the heat four victory ahead of Brian Shirley and Bobby Pierce.

Nick Hoffman, Hudson O’Neal and Dennis Erb Jr. moved on to the main event out of the first B-main of the night and Stormy Scott, Mason Zeigler and Chris Ferguson made the final cut for the feature from the second B-main.

Billy Moyer Sr. and Scott James made their way into the main event by way of the two B-main Scramble races.

At the start of the 100-lap Dirt Late Model Dream it was Sheppard who would take the early lead over Overton, Simpson, Bronson, and Hawkins. Over the race’s early laps Sheppard pulled away to a relatively comfortable advantage until he began to encounter heavy traffic by lap 11.

The first 20 laps of the Dream ran caution free with Sheppard maintaining his lead ahead of Overton, Simpson, a rising McDowell, Hawkins, a fading Bronson, then Owens and McCreadie.

However, the first yellow flag of the night would wave on lap 20 when Zeigler and James slowed.

When green flag racing resumed, Overton kept Sheppard close while Simpson, Bronson, and McDowell wrestled over the remaining positions within the top-5 until a caution flag was displayed for the slowing Pierce machine. Shortly after the restart, drivers Davenport and Erb, who start well back in the field, blasted into the top-10 to battle with Sheppard, Bronson, Overton, and the other top-10 runners.

Overton made a strong challenge for the race lead just after lap 30 while another mid-pack starter in the person of McCreadie began to move forward until another caution came out on lap 32 for a flat tire on Moran. On this restart, Davenport made his way to third while top-5 running Bronson slapped the outside wall in turn one and lost several positions.

At lap 40, Sheppard, Overton, and Davenport separated themselves from the rest of the pack while doing battle for the lead. Five laps later, Sheppard and Overton went side-by-side for the lead as they battled slower traffic. However, the slowing car of Pierce would again bring out a yellow flag on lap 47.

Overton had just cleared Sheppard for the lead on lap 52 but a yellow flag came out when Simpson spun before the lap could officially be completed. Overton continued to harass Sheppard for the top spot when the race went back to green. Bronson then joined the fight as those drivers went three-wide on lap 58.

McCreadie entered the top-3 after a lap 59 restart while Overton took the lead away from Sheppard on lap 61. Larson entered the top-5 and was making a move toward the front when he spun to avoid contact with McDowell while racing for fourth place to bring out a caution on lap 63.

With 30 laps to go, Overton built a lead over more than two seconds over McCreadie, Bronson, Sheppard, and McDowell. Behind the race leader, a fierce fight was joined to be the driver who would pursue Overton.

Lapped traffic would play a role as Overton’s lead would increase or decrease depending on when and where he caught the slower machines. The No. 76 would continue to control the race while those behind him fought for position.

In the end, it would be Brandon Overton who would cruise under the checkered flag to collect the big payday.