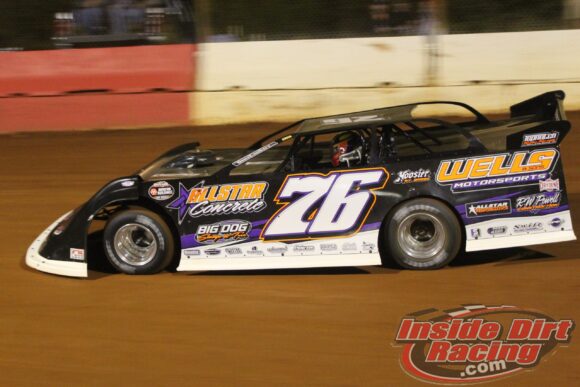 Brandon Overton picked up his fifth WoO win of the season

The World of Outlaws Morton Buildings Late Model Series kicked off a two-race weekend on Friday night at the Cherokee Speedway. At the end of the evening, it was Brandon Overton who left the Gaffney, SC facility with the winner’s trophy and a check valued at $10,000.

Brandon Overton was fastest in Group A qualifying with a lap of 14.800 seconds around the 4/10 mile clay oval beating out Ross Bailes, Ricky Weiss, Trent Ivey and Chris Madden.

Chris Ferguson led the way in Group B time-trials with a lap of 14.891 seconds to top Brandon Sheppard, Michael Brown, Kyle Strickler and Scott Bloomquist.

Chris Ferguson won out in the third heat ahead of Michael Brown, Darrell Lanigan and Scott Bloomquist just before Brandon Sheppard took the fourth and final heat of the night by beating Kyle Strickler, Anthony Sanders and Chase Junghans.

At the start of the 50-lap feature Bailes went immediately to the front with Overton, Sheppard, Ferguson and Brown in his tire tracks. The fast paced action was temporarily curtailed on lap 5 when a caution flag waved for the slowing car of Zack Mitchell.

Sheppard slipped by Overton to take the runner-up spot behind Bailes on lap 6 while, at the same time, Brown took fourth away from Ferguson.

On lap 9 it looked as if fourteen-time series winner and WoO Late Models points leader Sheppard might be on his way to another victory as he moved in to challenge Bailes for the lead. But after several laps of running the lower lane with Bailes on the top side of the track the No. 58 lead on to the top spot on the leader board.

The top-3 of Bailes, Sheppard and Overton then found themselves battling while in the midst of heavy slower traffic. Meanwhile, Madden, who is often a front runner in Gaffney, moved his new car into the top-5 on lap 14 and set off in hopes of gaining more spots.

Sheppard’s efforts finally paid off on lap 15 when he got by Bailes for the race lead. However, he did not breakaway as is often the case for the Rocket Chassis house car. Instead, the battle for second involving Bailes, Overton and Madden kept pace with the new leader.

Overton took second away from Bailes at the halfway mark then Madden moved by the early leader three circuits later. Sheppard then led a tight trio with Overton and Madden in tow around “The Place Your Momma Warned You About”.

Overton blasted by Sheppard to grab the lead on lap 34 while Bailes fought with Strickler for the fourth and fifth positions further back. Strickler eventually claimed fourth then closed in on the top-3 as they continued to work through slower traffic in a race in which the final 45 laps ran caution free.

Eventually Overton would cruise under the checkered flag to claim is fifth World of Outlaws Morton Buildings Late Model Series win of 2020 and his second triumph in the Mike Duvall Memorial at Cherokee.