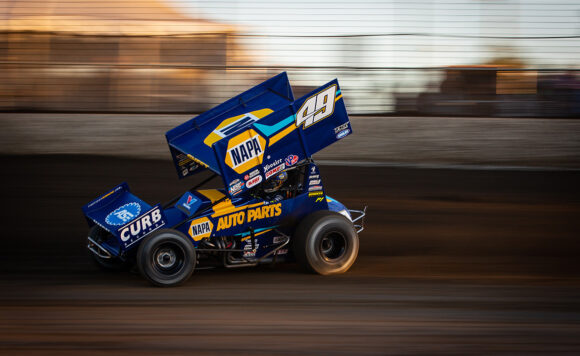 Brad Sweet in the Kasey Kahne Racing No. 49

CONCORD, NC — Dec. 31, 2020 — Points circled Brad Sweet’s mind and formulated his judgment for the past two years. The attempt of a risky move on track was overruled by a cautious calculation that saw a championship as the reward for his efforts.

That mentality worked in 2019 and 2020, giving the Grass Valley, CA driver back-to-back championships. But in 2021, he’s throwing caution to the wind.

With his name now etched in the record books alongside icons like Steve Kinser, Sammy Swindell, Mark Kinser, Donny Schatz and Jason Meyers as a multi-time champion, Sweet isn’t going to let the worry of points get in his way of fighting for wins.

“I feel really good,” Sweet said. “I feel like I’m in a really good place mentally. My life has a good balance. I have a good race team. Kind of in a good place to go out there and enjoy the moment and try to go after wins and not worry about points and things like that where I think we’ve let that control us in the last two years and take some of those wins away that, you know, I was being cautious and making sure that we finish and things like that.

“You really want to take those chances and get the wins. I really feel like next year, with the schedule the Outlaws have put together, and the big money races and a lot of promoters are stepping up and the purses are up, it’s a good opportunity for us to go out there and really show what we can do.”

When the 2021 season kicks off Feb. 5-7 at Volusia Speedway Park during the 50th DIRTcar Nationals, they’ll get to show what they can do at one of Sweet’s best tracks. In 34 Series starts at the half-mile speedway, Sweet has five wins, 16 top-five finishes and 20 top-10s. He hasn’t finished worse than fourth in his last seven starts there and won his second DIRTcar Nationals Big Gator championship in 2020.

“It says a lot about our guys and my race team,” Sweet said. “They bring a really fast car there every year.”

With his KKR team of crew chief Eric Prutzman and crew members Andrew Bowman and Joe Mooney returning for another year together, Sweet stated that gives them an advantage heading into the season opener.

“You can kind of see the teams that haven’t meshed yet or aren’t well prepared,” he said. “The teams that have been together are going to come out of the box a little better. I think that gives us an advantage going to Volusia. I think we can go to Volusia and be just as strong, or maybe stronger.”

Going in with a second champion under his belt has bolstered the team’s confidence, too.

When Sweet claimed his first championship in 2019 by four points over 10-time Series champion Donny Schatz – the closest points battle in Series history – he said it was sheer relief. Then, winning his second was validation. Especially with what he had to overcome.

He had four DNFs this year – three in a row. It was the first time since 2013 – before Sweet was full-time – that he had that many DNFs continuously. It cost him the points lead for several weeks, but after his last DNF at Knoxville Raceway, Sweet went on a run of 21 top-10 finishes in the final 24 races of the year. The three finishes outside the top-10 were all 11th – one due to an engine issue.

With that streak and eight wins on the season, Sweet was able to comfortably claim his second title.

He’s confident he and his team have cracked the formula on how to claim their third championship in a row. It starts by focusing on winning in Florida.

“Being a two-time champion, I feel like I know what we need to do to win the points,” Sweet said. “As long as we just keep doing what we’re doing, we feel like we’re the best team out there and we have a lot of confidence going into this season with what we were able to overcome in 2020 and even the year before.”

Get tickets to the Feb. 5-7 50th DIRTcar Nationals at Volusia Speedway Park by clicking here.