Brad Sweet gets first WoO Sprint win of 2022 at Vado 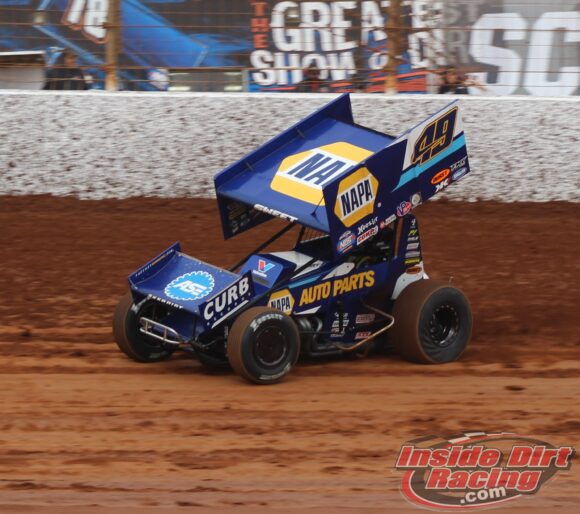 Brad Sweet picked up his first win of 2022

While the World of Outlaws NOS Energy Drink Sprint Car Series made its long-awaited debut at New Mexico’s Vado Speedway Park on Tuesday night, The Big Cat went ahead and made his long-awaited return to victory lane with the Series.

Sweet led all 30 laps at the Vado 3/8-mile but had to fend off a fury of challenges from Sheldon Haudenschildthroughout lap traffic to win the inaugural race at the state-of-the-art facility.

Amazingly enough, it had been 26 races and seven months since the Kasey Kahne Racing, NAPA Auto Parts #49 last won a World of Outlaws race at Skagit (WA) Speedway on September 4, 2021. That streak is now snapped and the Grass Valley, CA native hopes this is the momentum his team needs to really begin the run for a fourth consecutive Series championship.

“Yeah, it has felt like forever,” Sweet said on the length of his victory lane absence. “We just got stuck points racing last year and didn’t take those risks you need to win against these guys. As far as this year though, we’ve been fast all season and knocking on the door of getting this win. I’m happy for my guys. Eric [Prutzman], Joe [Mooney], and Andrew [Bowman] have been working hard, now we’re gonna get them the wins they deserve. This is the time to be getting better.”

The added significance in Tuesday’s triumph is that Sweet reached a milestone 75th career World of Outlaws NOS Energy Drink Sprint Car Series win. He’s now only nine wins away from tying Stevie Smith (84) for a spot inside the coveted top-10 on the All-Time Win List.

After qualifying sixth and finishing second in his Heat, Sweet used a perfect DIRTVision Fast Pass Dash to put the #49 in prime position to capitalize come showtime. From there, he survived some brief hiccups in lap traffic to make Vado Speedway Park the 42nd track he’s won at, while New Mexico became the 21st state he’s won in.

“These are honestly some of the hardest ones to win,” Sweet added. “Track position is just so key and lap traffic is tough when the track gets like this. It was hard to time the runs, and there was one time when Sheldon came across but luckily enough I was ready. I really didn’t want to catch any lappers, I just wanted clean air to control my own mistakes. You have to use your mind as much as you possibly can out there.”

Sheldon Haudenschild briefly led for a split second on Lap 7, but never could control the top spot enough to wrangle it away from Sweet. The Wooster, OH native finished only 0.768-seconds behind with a second-place effort for the Stenhouse Jr. / Marshall Racing, NOS Energy Drink #17.

“I definitely felt like we were a little quicker in open track,” Sheldon commented on the battle with Sweet. “I just didn’t have enough speed to clear the slider I needed with how the track was. California was a struggle for us, but [Kyle] Ripper, Stephen [Hamm-Reilly], and Jakob [Weaver] have been working hard to get us back on track. It’s amazing how much something as simple as qualifying good and getting in the Dash can help with that extra track time to figure out the car.”

For the first time since his season-opening win on February 10, Donny Schatz returned to the podium on Tuesday night. The 10-time Series champion finished up third in the Tony Stewart/Curb-Agajanian Racing, Ford Performance, Carquest Auto Parts #15 after taking a few shots at Sheldon for the second spot.

“These short tracks have not been our strong suit, but we’ve changed so many things that we’re getting it figured out,” Schatz mentioned. “I felt better as the race went on and thought we were catching those guys but didn’t get there quick enough to be able to capitalize on their mistakes. It’s a positive result, though, we’ll keep working hard.”

Closing out the top-five at Vado Speedway Park was new track record holder James McFadden in fourth-place aboard the Roth Motorsports #83, and David Gravel with a fifth-place run that brings the Big Game Motorsports #2 back to second in the standings.

Rounding out the top-10 on Tuesday night was Spencer Bayston in the CJB Motorsports #5, Carson Macedo in the Jason Johnson Racing #41, Cory Eliason in the Rudeen Racing #26, Logan Schuchart in the Shark Racing #1S, and Giovanni Scelzi in the KCP Racing #18.

Tuesday’s Feature at Vado Speedway Park was only the second of 11 races this season that featured no lead changes.

Brad Sweet’s 75th career World of Outlaws win leaves him only nine away from tying Stevie Smith (84) for 10th on the All-Time Win List. Tuesday’s win snapped a 26-race dry spell for Sweet, his longest over the last four years.

UP NEXT (Fri) – Another 10-hour haul will lead the World of Outlaws NOS Energy Drink Sprint Car Series to its only stop in Oklahoma this Friday, April 1 at Lawton Speedway. On Saturday, April 2, Devil’s Bowl Speedway offers a $20,000 payday in the DuraMAX/Drydene Texas Outlaw Nationals.