The second day of the 6th annual Leftover event at 411 Motor Speedway once again brought competition in the 604 Crate Late Model division as well as in the Brucebilt Iron-Man Modified Series. After all was said and done it was Booger Brooks who came away with the Crate Late Model victory while Lucas Lee claimed the checkered flag among the Modifieds. 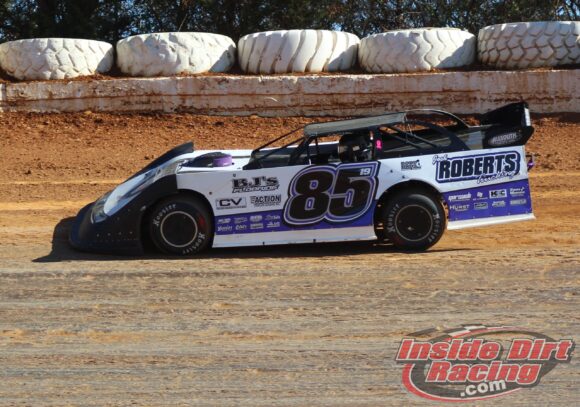 The top-12 from qualifying were locked into the feature through qualifying.

Trevor Sise took the win in the first B-main of the day ahead of Bryson Dennis and Logan Walls while Josh Collins scored the victory in the day’s second preliminary over Chris Chandler and Trey Bayne.

It was Greg Martin who came out ahead of Brian Kinnersley and Joey Kramer in the third B-main then Tim Clark defeated Justin Hammett and Dalton Brown in the fourth and final B-main.

At the start of the 30-lap feature Brooks took the early lead with Williams, Roberson, Zach Sise and McCarter trailing. Roberson moved by Williams to claim second on the second circuit but Williams would fight back as those two drivers engaged in a blattle that would go on for several laps until a caution flag waved on lap 5 when King and Cardwell spun.

Brooks, who tangled with slower traffic while leading on Friday night, began lapping cars on lap 13. This time, the No. 85 was flawless as the driver picked his way through. Still, Roberson was able to close in as he looked inside of the leader on multiple occasions but was never able to make a move to wrest the top spot away.

Roberson continued to work the inside line as Brooks stayed high. In the end, Brooks would hold on to claim the win.

Booger Brooks earned a paycheck valued at $1,500 for his win, 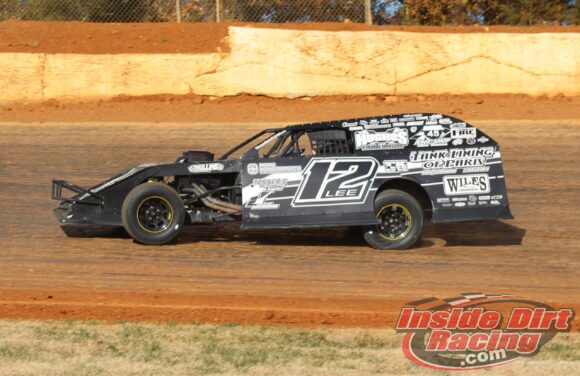 Lucas Lee made a three-wide move to take the lead

A total of 43 cars were signed in for competition.

The top-8 from qualifying were locked into the feature.

Ricky Tinch grabbed the win in the first B-main of the day over Hunter Wilbanks and Brian Nantz while Ben Harmon scored the victory in the day’s second preliminary beating out K.C. Burdette and Justin Blevins.

It was Tommy Bailey who topped Ervin Vance and Robert Poole in the third B-main then Joey Cotterman defeated Jeff Parsons and Joe Freels in the fourth and final B-main.

When the green flag waved over the 25-lap feature it was Kinzer who took the early lead ahead of Lee, Asberry, Brown and Miller. Miller took fourth away from Brown on the second lap then quickly moved into a three-wide fight for second with Lee and Asberry.

A lap 7 caution bunched the field. Two laps after returning to green flag action, Miller and Asberry wrestled for the third position. Further ahead, Lee closed in to take up the battle for the lead with Kinzer.

As the leaders worked through slower traffic on lap 21, Lee seized upon an opportunity and went low coming off of turn two. Going three-wide with Lee on the bottom, a slower cars in the middle and Kinzer up top, Lee emerged from that scrum with the lead as the cars entered turn three.

Over the closing laps, Lee would maintain the lead and eventually drive under the checkered flag for the win.