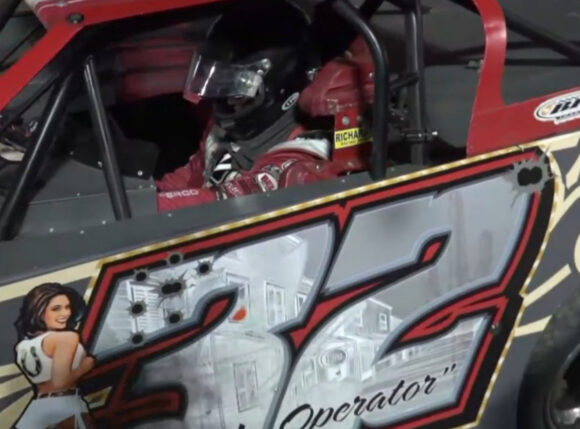 The second night of the Late Model portion of the 50th annual DIRTcar Nationals hit the track at Volusia Speedway Park on Tuesday night. Bobby Pierce came away from the Barberville, FL facility with a thrilling win in the DIRTcar-sanctioned event in a race shown live by DirtVision.com. The Oakwood, IL driver collected $7,000 for the triumph.

A total of 51 cars signed in for competition.

Brandon Overton turned the fastest lap in Group A qualifying and overall with a time of 15.982 seconds around the half-mile clay oval to beat out Ricky Thornton Jr., Bobby Pierce, Rick Eckert, Chad Finley, and Scott Bloomquist.

Brandon Overton won out in the night’s first heat race over Rick Eckert and Mark Whitener while Ricky Thornton Jr won out in the second preliminary ahead of Josh Richards and Tyler Bruening.

Blair Nothdurft and Shane Clanton moved to the main event out of the first Last Chance Showdown before Brent Larson and Tim McCreadie led the way in the second LCS. Tony Jackson Jr. and Kyle Strickler were the final two drivers to make it to the feature via a Last Chance Showdown.

At the start of the 30-lap feature, it was Pierce who went to the lead with O’Neal, Sheppard and Thornton trailing. Soon after the start, Sheppard and Moran engaged in a fierce, slide job swapping fight for third with Moran ultimately prevailing on the third circuit.

A caution slowed the action on lap 4 for the slowing car of Tyler Bruening. At that point, Pierce was scored as the leader ahead of O’Neal, Moran, Sheppard, and Thornton.

On the restart, Moran closed in to challenge O’Neal for second while, further back, Overton fought with Thornton for the final position in the top-5. However, another yellow flag slowed the action on lap 10 as the car of Richards slowed.

On the lap 10 restart, Moran charged to second while O’Neal and Sheppard wrestled for third. Moran closed in on Pierce for the lead and threw a big slide job on the No. 32 but Pierce countered with a crossover to regain the top spot.

As the laps clicked away, Moran closed in and looked as if he might again make a bid for the lead but Pierce was able to hold back his challenger’s advances for the win.

“Man, I was pretty nervous there,” Pierce admitted in his victory lane interview. “Me and Devin are good buddies and that was probably the funnest race we’ve had. There at the end, I saw that he was in second on the board. I was thinking, if I’m cut out for this stuff surely we can make ten more good laps. We’ve been gone for over a month, we were home for one night, but we’ve been chasing that win and finally got it.”

Pierce said he had to gamble to get the lead back after Moran moved around.

“I don’t know how I pulled off that crossover in the slick,” he declared. “I timed it just right and I think I about took his left front off making that crossover work.”