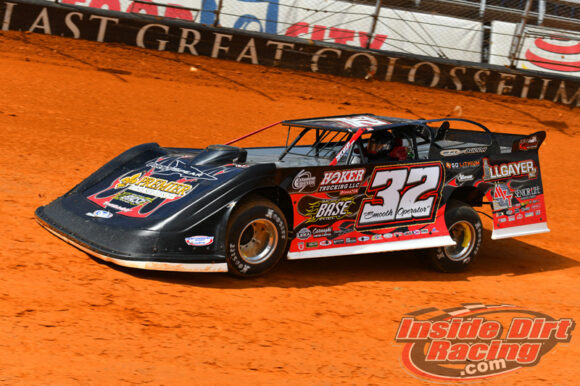 Bobby Pierce got his second win of the week

Bobby Pierce had already won one of the 17th annual Rio Grande Waste Services Wild West Shootout features earlier in the week but he added another victory on Sunday night. And not only was it a win but it was the best paying portion of the six events held at Vado Speedway Park.

The Longhorn Chassis driver from Oakwood, Illinois earned $25,000 for his efforts on the 3/8 mile clay oval located in Vado, New Mexico in a race shown live by FloRacing.com.

A total of 43 cars were signed in for competition

Feature Re-cap: The 50-lap main event took the green flag with Pierce leading over Davenport, Larson, Stormy Scott and Alberson. Davenport and Pierce spent the next four laps exchanging slide jobs and the lead of the race until Pierce bobbled on lap 6 allowing Larson to grab second.

Alberson and Scott engaged in a fight for fourth and fifth that went on for several laps until Marlar broke into the top-5 and passed both.

Pierce went by Larson for second on lap 15. The No. 32 then went by Davenport for the lead on lap 18. With Pierce leading, Davenport, Larson, Marlar and Stormy Scott were involved in a wild scramble for positions inside the top-5.

Marlar eventually took second at the halfway point and then began reeling in Pierce as the front runners raced among slower traffic. Davenport bobbled at that time which allowed Larson and Scott to get by just before Johnny Scott slowed to bring out a yellow flag on lap 28.

On the lap 28 restart, Davenport jumped back up to fourth behind Pierce, Marlar and Larson. However, Scott would get back around Davenport on lap 32 for fourth.

Marlar and Larson used an outside line to get by Pierce on lap 34 to take first and second. Larson then began to harass Marlar for the lead as the laps clicked away. Pierce regained momentum and got back around both Larson and Marlar with 8 to go.

Larson moved to second with 5 laps remaining and went after Pierce. Larson three a pair of sliders at Pierce but Pierce was able to cross over each time. In the end, it was Pierce who roared under the checkered flag to claim his second win of the Wild West Shootout.