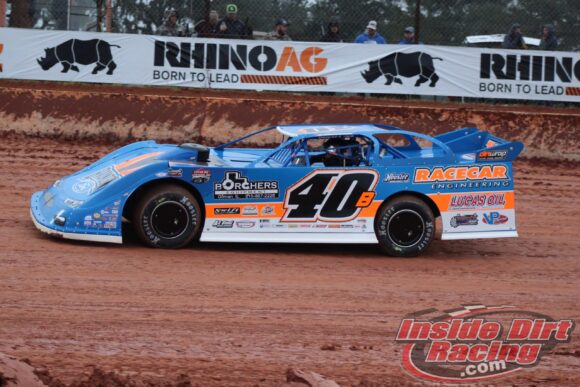 Following a layoff of 100 days because of the shutdown from the coronavirus pandemic, the Lucas Oil Late Model Dirt Series took on the Golden Isles Speedway for the second consecutive night on Wednesday. When the dust had settled it was Kyle Bronson who drove a car with damage suffered in a late race incident to earn a $7,000 winner’s payout from the track located near Brunswick, GA.

Jonathan Davenport was fastest in Group A qualifying by posting a lap of 15.158 seconds around the 4/10 mile clay oval to better the efforts of Jimmy Owens, Josh Richards, Chris Ferguson, Max Blair, Tyler Erb, Brandon Overton and Kyle Bronson.

Devin Moran showed the way in Group B time-trials and over all with a lap of 15.020 seconds to beat out Tyler Bruening, Brandon Sheppard, Steven Roberts, Shane Clanton, John Baker, Mason Zeigler and Pearson Lee Williams.

Josh Richards would start the feature race from the pole by virtue of winning the first heat of the night over Jonathan Davenport, Max Blair and Brandon Overton while Jimmy Owens took the second preliminary ahead of Tyler Erb, Kyle Bronson and Tanner English.

Rick Eckert won the first B-main of the evening ahead of Tim McCreadie and Brian Shirley then Brandon Sheppard took the second B-main over Billy Moyer, Jr. and Michael Norris.

At the start of the 40-lap main event it was Moran who took the early lead over Richards, Bruening, Owens and Tyler Erb. During the early stretches of the feature the front runners strung out and logged laps with rain threatening.

On lap 14 second running Richards closed in on Moran in traffic and began to challenge for the lead. Further back Tuesday night winner Owens moved in to battle with Bruening for third. One lap later the No. 20 would take third from Bruening leaving the young Iowa driver to fight with Erb, Davenport and Clanton for positions 4-7.

A series of cautions between laps 25 and 30 completely changed the complexion of the race.

On a lap 25 restart, Owens bolted into second and looked to take on Moran. However, another yellow flag waved just one lap later for the slowing car of Blair.

On the lap 26 return to green, Richards went back to second with Owens fading back to fifth. Moran continued to lead with Richards, Erb and Bronson now in pursuit.

On lap 30 the Moran car slowed suddenly in turn four. Richards was unable to avoid the prone machine which caused significant damage to both cars. Bronson was also unable to avoid the melee, hitting Moran in the back then glancing off the outside wall.

Moran retired from the race after leading the first 30 laps while Richards returned to action following a stop to change a flat tire. Bronson never stopped on the track nor did he come to the pit area so he inherited the lead as a result.

On the lap 30 restart the fifth running car of Overton hit the wall in turns three and four then Bruening slammed into the No. 76.

On the final restart Bronson was able to pull away from Erb and Owens over the course of the remaining laps. The Florida native then drove to the win despite a battered right side of his car.