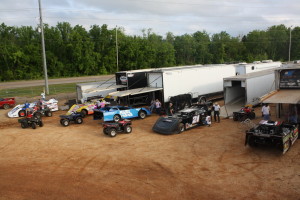 Race cars may continue to pack the Cleveland Speedway pit area in the future.

The future of Cleveland Speedway remains uncertain. However, there appears to be at least some reason for optimism among East Tennessee fans and racers for the historic track.

A hearing had been scheduled for December 12th in the U.S. Federal Bankruptcy Court in Chattanooga where bids were to be accepted for the property that sits at 2420 S. Lee Highway.

The track had filed for Chapter 11 bankruptcy protection back in 2011 and was given a time period of two years to show that it could turn a profit and make progress toward settling its debts. That two year period has ended and the court has decided to sell the venerable facility.

But the court’s action was delayed for one week so that the trustee in the case could further determine the level of interest of potential bidders.

“Well, we had some people who showed up today that said they had some interest in possibly purchasing the speedway. I hadn’t really heard much from those folks in the last several weeks,” Jerry Ferinash, who is serving as the Chapter 11 Trustee for Cleveland Speedway, told Chattanooga television station WDEF.

Rumors have circulated for weeks that the speedway grounds would be purchased by an entity who had interests other than racing for the site. Now it seems as if there is hope for the third-mile facility, which opened in 1954, to continue hosting dirt track events in the future.

The court will again consider the track’s fate on December 19th after Ferinash has had time to fully evaluate the situation.

“Everything’s okay,” declared Lisa Clem Willkomm who, along with husband Ronnie, has managed the track for the past two years. “Its looking better, just keeping our fingers crossed, keeping the faith, hoping everybody will be pleased with the outcome.”