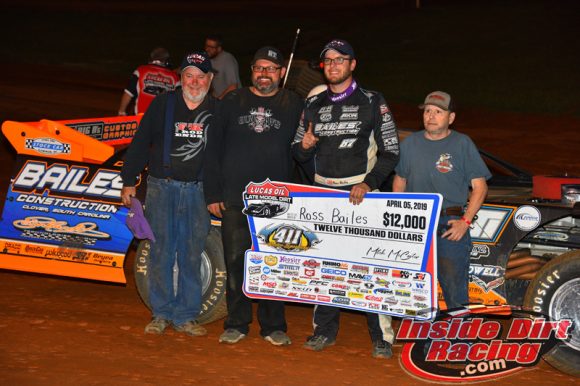 Well, that’s not exactly the best way to describe the reuniting of car builder Barry Wright and driver Ross Bailes, but it’s close. The duo were paired together with some success for a short time in 2017 before Wright joined forces with Chris Madden to make a run at the World of Outlaws Late Model Series title in 2018. But when Madden took a ride with Greg Bruening during the most recent off-season that left the Barry Wright Race Cars house car seat open for the current campaign and Bailes was chosen as the man to get behind the wheel.

And so far the reunited combination has experienced great success. A total of four winner’s paychecks have been collected in 2019 with three of those being valued at $10,000. Bailes won his first career Lucas Oil Late Model Dirt Series race in April at 411 Motor Speedway then scored his first career win with the World of Outlaws Late Model Series at Cherokee Speedway in May. Wins with the Ultimate Southeast Series and the Spring Nationals were also earned.

Wright feels as if there have been improvements on all fronts since Bailes last drove a BWRC.

“You know, we ran pretty good when he was with us before,” the legendary chassis guru pointed out in an interview with InsideDirtRacing.com. “We’ve got our cars better and he’s become more mature. We’ve still got a long way to go but we’ll learn and keep getting better.”

The No. 87 team does not run a particular series which gives them the opportunity to pick and choose the events they feel are most advantageous for them to compete in.

“Oh yeah, it does,” Wright replied when asked if it gives his team satisfaction to drop into series races and beat the regulars. “And he’s doing a heck of a job. The biggest thing is, this sport is not like some other sports where you’ve got one player, because it’s a team effort. My son(Lance Wright) is a big part of it and I’m trying to teach him so he can take over the business someday. We’ve just gelled. We’ve had some heartache too, it’s not all been glory. But we’re doing well and there’s a lot of people doing a lot worse.”

Over the past several years a number of Dirt Late Model racing’s top drivers have wheeled the BWRC house car including Bailes, Madden, Jimmy Owens and Jonathan Davenport.

So does the car have to be constructed differently for each driver?

“It’s the same car no matter what but you have to find different setups and the right combination for different drivers,” Wright explained. “The setup that Chris ran, and he did a great job, didn’t work for Ross so we had to find out what he liked. We got lucky and hit it pretty quick and it’s been good ever since.” 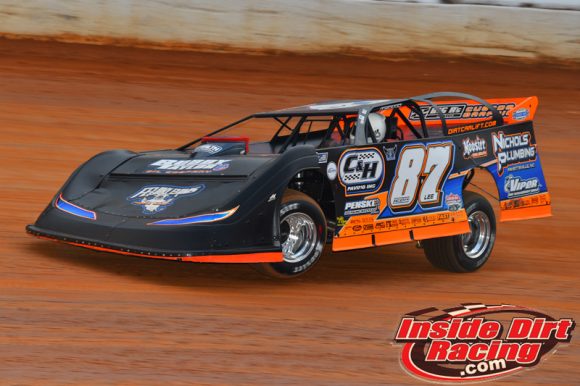 For his part, Bailes believes that their team has been good from the very beginning of the season. He attributes much of the early success they have experienced to the fact that the pair had learned each other’s ways during their previous stint.

“We’ve been good all year,” Bailes declared while speaking with InsideDirtRacing.com. “Right from the start we’ve qualified good, we’ve heat raced good, and we’ve gotten better in the features. Everything is just clicking right now. When I did this thing with Barry before we were really good and I felt confident in it. I feel like we were able to skip the learning curve because back in ’17 was our learning curve. We’re hitting on all cylinders right now and I’m looking forward to the rest of the year.”

Bailes credits Wright for being able to adapt from one driver to the other.

“At the beginning of the year we were good but we’ve gotten better throughout the year, I feel like,” Bailes explained. “It’s just all driver preference. Some of the stuff that worked for him(Madden) don’t work for me and the stuff that works for me didn’t work for him. It’s just trying to find what I like and what I feel good and comfortable with. That’s what makes us fast.”

And while the World of Outlaws win came on familiar clay, the LOLMDS victory came at a track Bailes had never raced on before. That will also be the case this weekend in the Dirt Late Model Dream at the Eldora Speedway.